The tourists crumbled to an innings and 40 runs defeat to Australia inside three days of first Test.

Former captain Marvan Atapattu reckons that Sri Lankan players’ body language needs improvement and that lack of an intent contributed to their crushing defeat in Brisbane.

The tourists crumbled to an innings and 40 runs defeat to Australia inside three days of first Test.

Pacer Pat Cummins rolled them over across two innings finishing with match figures of 10/62 including a 6/23 in the second essay. Sri Lanka posted 144 and 139 at the Gabba to hand a 1-0 lead to the hosts.

“The only criticism that I have is that they [Sri Lanka] looked surprised and were caught off guard,” Atapattu told The Island. “That s my concern. When they batted the first couple of overs – we know that Mitchell Starc has not been up there and he has struggled all summer. As soon as Pat Cummins started, we were telling ourselves that this is impossible.”

He continued, “We were not looking to score runs and our body language was stiff. I am not saying it is a 350[-run] wicket. All what I am saying is that our intentions could have been better.”

He also asked Sri Lankan top-order to take more responsibility, especially Kusal Mendis who was the leading run-getter in Tests last year, finishing with 1023 runs. He managed 14 and 1 in the first Test.

While calling him one of the “extremely talented players”, Atapattu, who played 90 Tests between 1990 and 2007, felt that Mendis might have been taking his place for granted in the absence of competition.

“He [Mendis] is one of those extremely talented players. I remember sitting with [former coach] Graeme Ford at Pallekele and we saw he played two balls off Suranga Lakmal in a practice game and we said he is going to go a long way. He has done well,” he said.

He added, “It is important that he maintains his composure, discipline and remains humble. He is immensely talented. It s about improving his game. It is so easy to relax when there s no competition and no one is pushing for your place. You tend to think: ‘I am there forever. My place is not up for grabs’. When you play for Sri Lanka, there should be some amount of pressure. Some amount of responsibility. That s when the best comes out of you.”

The second Test gets underway from February 1 at Manuka Oval in Canberra. 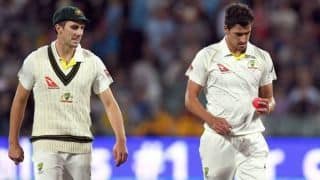