Australia win toss, elect to bat in second Test against West Indies at Port of Spain

Australia win toss, elect to bat in second Test against West Indies at Port of Spain

Australia won the toss and skipper Michael Clarke opted to bat first against West Indies in the second Test at Port of Spain, Trinidad on Sunday. 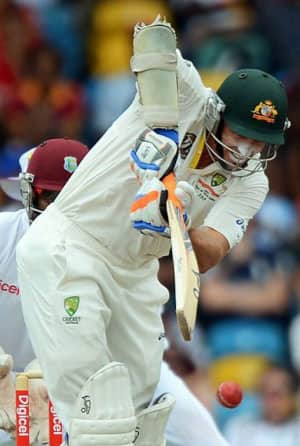 Australia won the toss and skipper Michael Clarke opted to bat first against West Indies in the second Test at Port of Spain, Trinidad on Sunday.

West Indies lost the first Test to Australia in a thriller by three wickets in a thrilling finish.

Ben Hilfenhaus hit the final run of the 192 run target with the light fading fast to give the tourists victory after the hosts had fought back to keep the game in the balance.

A half-century from Shane Watson and a rapid 32 from Mike Hussey were the key contributions as the visitors got home in the gloom. Fittingly, Man of the Match, Ryan Harris was with Hilfenhaus at the crease at the end.

During the morning the West Indies had added 77 more runs to their overnight total of 71 for 5 to set a relatively tough target of 192. The hosts hadn’t looked like getting anywhere near that when they started the day on 71 for 5 and promptly lost Narsingh Deonarine lbw to Ryan Harris. Sammy went for 14 as he played a delivery late and it dropped behind him and was heading towards the wicket – he tried to kick the ball away but he only managed to knock the ball against the stumps.

Carlton Baugh was key to the West Indies reaching a competitive total. On 18, he edged a Ben Hilfenhaus delivery straight to first slip. Michael Clarke, who had just taken himself out of that position, crouched down in disbelief.

It wasn’t too costly as with the first ball of his next over Hilfenhaus provoked Baugh into chipping straight to Harris at mid-on. Fidel Edwards was next to go as he holed out to Watson at mid-off off Siddle. West Indies last pair batted long enough for lunch to be delayed but, having added 19 runs, Kemar Roach got an inside edge off a Harris ball and it crashed into his stumps.

When they came out, the West Indies set defensive fields as though a draw was their only hope and succeeded in restricting Ed Cowan and David Warner. Warner, perhaps in frustration, tried to run a Darren Sammy ball to third man but instead he got a thin edge through to Baugh. Watson eventually settled after some narrow escapes and following the tea break both he and Cowan accelerated the scoring.