Social media accounts which use the Southern Stars name will remain, because of their strong following, but the official name and logo will be changed to reflect the new convention.

Melbourne [Australia]: In a significant move towards gender neutrality, Cricket Australia has removed the tag of Southern Stars from the Australia women‘s cricket team. The two national outfits will now be referred to in the same way – simply as the Australian women’s cricket team and the Australian men’s cricket team, the board announced on Wednesday. The decision was announced to the current Australian Women’s World Cup squad, and members of past World Cup winning teams, at a special function in Brisbane on Saturday night. The evening celebrated the achievements of the teams that won in 1978, 1982, 1988, 1997, 2005 and 2013. ICC Women’s World Cup 2017: Lanning delighted with return of Taylor

Speaking on the move, chairman of Cricket Australia David Peever said, “This move may appear symbolic, but it does carry considerable weight. Cricket cannot hope to be a sport for all Australians if it does not recognise the power of words, and the respect for women that sits behind such decisions.”

He said the challenge had been issued at an Australian cricket conference last year by leading businesswoman Ann Sherry and that made the board directors and management think about it more closely.

“Ann rightly questioned whether we were walking the talk, whether we understood what it takes to be truly gender neutral, and a sport that is welcoming to women.”

The Cricket Australia chairman further said that the board had approved the naming convention, and it would apply across all communications.

“We are not dropping the Southern Stars, a wonderful brand that our cricketers have created and which will remain as an alternative name for the team, but the new naming convention demonstrates that Cricket Australia is looking at all the ways in which it operates to ensure we can meet the ambition of being a sport for all,” he insisted.

Social media accounts which use the Southern Stars name will remain, because of their strong following, but the official name and logo will be changed to reflect the new convention. The Australian women’s team, led by Meg Lanning, will depart for England on Friday for the 2017 ICC Women’s Cricket World Cup. They are scheduled to play a warm-up match against South Africa at Oakham on June 20, before opening their tournament campaign against West Indies on June 26 in Taunton. 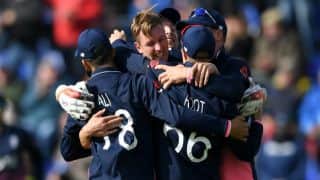