Australia Women are set to clash against West Indies Women in final of T20 Women's World Cup 2016 at Eden Gardens, Kolkata on Sunday.

Australia Women are set to clash against West Indies Women in final of T20 Women’s World Cup 2016 at Eden Gardens, Kolkata on Sunday. The live streaming of the match will be available on starsports.com, while online streaming will be visible on hotstar.com. Live telecast will be broadcast over Star Sports HD 1 and Star Sports 1. Australia have vast experience in T20 Women World Cup final while West Indies who have maintained calm and composed behavior throughout the tournament will find difficulty in playing under pressure situation. The race for earning title trophy for both teams will be record breaking. Live Cricket Scorecard: Australia Women vs West Indies Women, Final match, ICC Womens T20 World Cup 2016

West Indies beat undefeated New Zealand Women in semi-final while Australia Women defeated England Women to reach for their fifth time final spot. The spinning department of Windies led by Stephanie will have to save their best for the big day.  The likes of Shaquana Quintyne and Afy Fletcher will have to step up and do their job from the other end. The Southern Stars rely on their skipper Meg for majority of runs. To their delight, Meg’s opening partner Elyse Villani has also been in good touch with the bat, which has reduced some burden off Meg’s shoulders. The pick of the bowlers for Southern Stars has been Megan Schutt, who has seven wickets from five matches.

It has been a great year for West Indies Cricket. The ICC Under-19 Cricket World Cup was claimed by them defeating the Indian U-19 boys in the final. Darren Sammy and Co also have made it to the final of World T20 and they will play England later in the day at Eden Gardens. 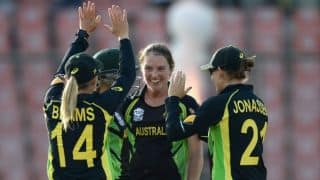