The allrounder Marcus Stoinis has been named men’s ODI Player of the Year at the 2019 Australian Cricket Awards, beating the likes of Shaun Marsh and Aaron Finch.

Stoinis scooped the covered award at the annual function – formerly known as the Allan Border Medal – as the gala event got underway in Melbourne with the men’s ODI category. This the 29-year-old’s first such award and makes him the first seam-bowling allrounder to win the men’s ODI title since Shane Watson did so from 2010-2012.

During the voting period of January 7, 2018 to January 9, 2019, Stoinis was the constant factor in the 13 ODIs that Australia played. None of his team-mates featured in all 13 games, of which Australia won just two.

In these games, Stoinis finished as Australia’s third-highest run-getter with 376 at 28.92 while batting in the lower middle order and he claimed the most wickets (13) at 36.77 apiece.

In comparison, Marsh scored three centuries in seven games during this period at an average of 59.83. Finch, Australia’s limited-overs captain, led the team’s run-chart with 493 at 44.82 with three centuries. 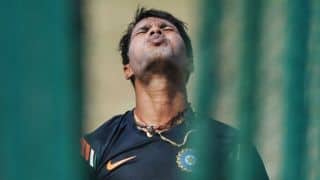