Australian media on Friday welcomed the return of the 'killer instinct' after their wildly inconsistent team surprisingly humbled India's distinguished batting order to win the first Test in Melbourne. 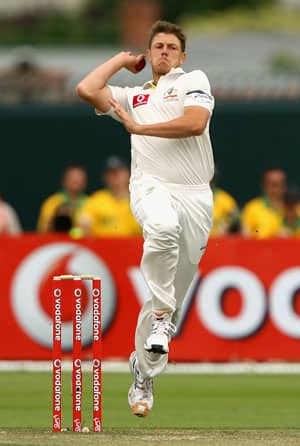 Australian media on Friday welcomed the return of the “killer instinct” after their wildly inconsistent team surprisingly humbled India’s distinguished batting order to win the first Test in Melbourne.

Australia, condemned as the “lowest of the low” after this month’s shock defeat to New Zealand, had “rediscovered their mongrel”, or fighting spirit, in fiery paceman James Pattinson, The Sydney Morning Herald said.

Above a front-page picture of Pattinson celebrating with fellow fast bowler Peter Siddle, the paper declared: “Test team’s killer instinct is back, sharpened for the SCG (Sydney Cricket Ground)”.

“James Pattinson could not have channelled Dennis Lillee more convincingly without growing whiskers and wearing his shirt unbuttoned to the waist,” Chloe Saltau wrote, in reference to the iconic fast bowler of the 1970s and 1980s.

Not only rejuvenated by new talent such as Pattinson, the team also benefited from the direction of skipper Michael Clarke, commentators said.

After a year of turmoil and change, the Australians had finally indicated they could be on track to regaining their dominance of the sport with their 122-run win over India, he said.

The Australians had made a “giant leap” from Bellerive Oval earlier this month where they suffered the humiliating loss to New Zealand, ranked eighth in the world, to thump the second-ranked Indians, The Australian said.

“Two weeks from humiliation to jubilation as bowlers wreak havoc on Indian demi-gods,” declared the broadsheet in a front-page headline.

“Michael Clarke’s men maintained their maddeningly inconsistent recent form by dismantling the might of India to claim an extraordinary 122-run victory inside four days,” the paper said.

Praise was heaped on feisty 21-year-old Pattinson, who earned an official warning after bowling three successive bouncers to Zaheer Khan towards the end of the match.

“Pattinson might be young and inexperienced, but he brings to his game the sort of aggression and passion that treads a fine line and brings back memories of the speedsters of old,” The Australian’s Peter Lalor said.(AFP)