Australia's media Friday hailed Michael Clarke's "Bradmanesque" triple century against India, calling it the innings of the 21st century while praising his selfless declaration while unbeaten on 329. 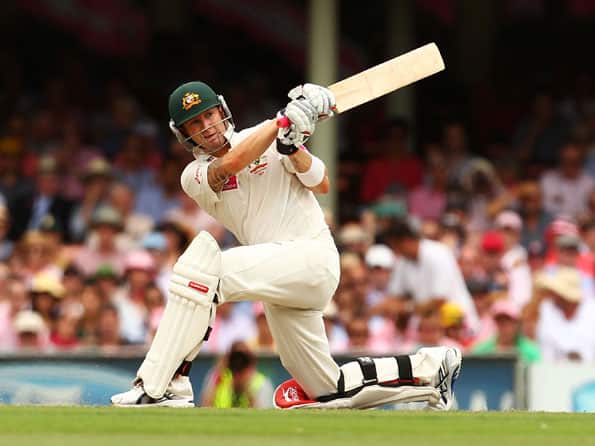 Australia’s media Friday hailed Michael Clarke’s “Bradmanesque” triple century against India, calling it the innings of the 21st century while praising his selfless declaration while unbeaten on 329.

Captain Clarke became only the sixth Australian to score 300 before calling a halt to his team’s first innings at 659 for four and a massive lead of 468 runs on the third day of the second Test.

“Bradmanesque Pup gives team a triple treat,” The Australian said in a front page headline, referring to the skipper by his nickname, given to him due to his youthful precociousness.

The 30-year-old has battled to win over the Australian cricket public since taking on the Test captaincy and a year ago was booed as he came out to bat in a one-day international against England in Brisbane.

But his 329 not out on Thursday helped win over many detractors, particularly his decision to declare while just shy of beating the 334-run milestone of Australian greats Don Bradman and Mark Taylor.

“The captain showed the poise and dedication he must always have known was within him,” The Australian said in an editorial.

“The Bradman/Taylor mark stands, but Clarke can claim the innings of the 21st century, a remarkable, old-fashioned performance by a captain who lived up to the finest traditions of the game.”

The Sydney Morning Herald was equally gushing in its praise of a man who is not the archetypal Australian cricket captain: he’s fresh-faced, tattooed, and loves Twitter and the high life.

“Pup’s long knock shows his time has finally come,” said columnist Greg Baum, adding that the reception he received on reaching 300 may finally have signalled that he is now accepted as a top class cricketer.

“The ovation was like the innings — rousing, resonant and sustained. In its echo, an era might have begun.”

The Sydney Daily Telegraph called Clarke the “King of the SCG”.

“329 runs, 468 balls, 609 minutes… 1 legend,” it said under a picture of Clarke with his hands raised after reaching the triple century landmark.

Like other media, it also focused on his declaration, with personal glory taking a back seat to the team winning the Test.

“By deciding to walk off unbeaten on 329, the Australian captain made another strong sign of intent,” the paper’s chief cricket writer Malcolm Conn said.

“For all the glory of such rare and joyful personal milestones, the only thing that really counts is winning.”(AFP)