Fuming after former Indian spinner Laxman Sivaramakrishnan's appointment as a players' representative in the International Cricket Council (ICC), the Australian players' union has called the ICC the "most ineffective governing body in world sport". 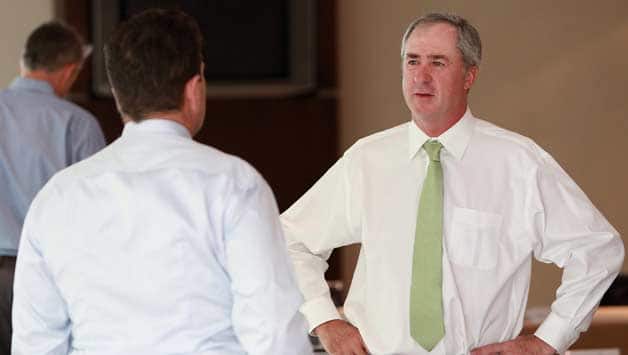 The Federation of International Cricketers Association, of which Tim May (above) is the CEO, has already expressed its anger over Laxman Sivaramakrishnan’s appointment © Getty Images

Fuming after former Indian spinner Laxman Sivaramakrishnan’s appointment as a players’ representative in the International Cricket Council (ICC), the Australian players’ union has called the ICC the “most ineffective governing body in world sport”.

“This issue encapsulates all that’s wrong with cricket at the moment. The irony of the situation is the ICC is supposed to be the body that upholds all those ethical standards that it asks of the players,” he added.

The furore was caused after allegations that BCCI forced a re-vote to get Sivaramakrishnan appointed on the ICC Cricket Committee after May won the initial vote 9-1.

“From a players’ perspective, we are very angry and we want the ICC to act. But to be honest with you, I’m pessimistic that it will do so,” Marsh said.

“The ICC is the most ineffective governing body in world sport. I don’t think any of the boards are strong enough to stand up to India. So in many respects it rests with the players,” he added.

He did not rule out industrial action against the move after consulting the players.

“I hope from the players’ point of view that this is a tipping point.”

The Federation of International Cricketers Association, of which May is the CEO, has already expressed its anger over Sivaramakrishnan’s appointment.

“This is a sad indictment on an organisation carrying a mandate to provide an effective framework for the management of the global game,” FICA President Jimmy Adams has said.

“These actions are symptoms of poor governance at the top level and a blatant disregard for what most would regard as the necessary ethical standards required to run a prominent international sport. Cricket deserves a lot better.”

Sivaramakrishnan, on the other hand, has sought to downplay the controversy.

“…I don’t go by the reports that have been coming on the website and the newspapers because there’s a lot of fiction attached to it, more than facts.

“People want to build stories. Probably that is their job to fill up the blanks in their newspapers.”

It is alleged that Sivaramakrishnan would support the BCCI’s staunch opposition to the controversial Umpire Decision Review System in the ICC. But he chose not to react.

“I will say whatever I feel about the DRS in the meeting and it’s the final consensus of the committee whether to take up a decision to put the DRS in place or leave it optional, so it’s not entirely my call,” he said.