Ellyse Perry was the player-of-the-match for her 72 runs and three for 42.

The Australian women’s cricket team, also called the Commonwealth Bank Southern Stars, defeated the West Indies women by 53 runs in the second One-Day International (ODI) at Hurstville Thursday. After winning the toss and electing to bat, the Australian side was bowled out on the last ball of their innings for 256, a total which the West Indies side failed to chase down, finishing 203 for eight from their 50 overs.

Ellyse Perry was named player-of-the-match for her 72 runs and bowling figures of three for 42. Opener Nicole Bolton notched her second half-century in as many matches, building an innings of 76 before she lost her wicket in the 32nd over thanks to a brilliant catch at short mid-wicket by Anisa Mohammed.

Perry also scored her second straight half-century in the series, with her innings of 72 including seven fours. Deandra Dottin (4-42) and Hayley Matthews (3-42) were the pick of the West Indies bowlers. West Indies opener Matthews, who only made her ODI debut in the previous match, was the standout of her side’s innings.

The 16-year-old notched up 89 runs, including 12 fours, before she sliced one to Meg Lanning at mid-off.  Her fellow opener Kycia Knight was the next best with the bat, finishing on 45 before she was trapped lbw by Erin Osborne (2-38). The two teams will now travel to Bowral for the remaining two ODIs. 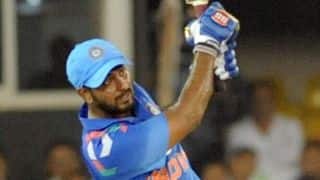