Australia‘s bowling coach David Saker quit Thursday just months out from the World Cup and an Ashes tour to England “for the best interests of the team”.

Saker, who performed a similar role with England before joining the Australian set-up in 2016, resigned after lengthy talks with coach Justin Langer.

“David and I have had ongoing discussions over the past nine months about his role with the team, and we agreed it’s the right time to head in a different direction in the best interests of the team,” Langer said.

“I’d like to thank David for his significant contribution, in particular in the role he has played in helping develop a core group of Australian pace bowlers.”

Saker, who has nurtured the likes of Mitchell Starc, Josh Hazlewood and Pat Cummins, said he had enjoyed his time with the Australian team.

“I’d like to thank Cricket Australia for the opportunity to help coach the Australian men’s team over the past three seasons,” he said.

“I’ve enjoyed my time with the team, in particular working closely with a great group of fast bowlers and in time will look forward to a new coaching role.”

Cricket Australia said Troy Cooley will oversee the bowling group for Australia‘s upcoming one-day series against India and Pakistan, with discussions about the coaching structure for the World Cup and Ashes ongoing.

Cooley has previously worked as an England bowling coach and is seen as instrumental in helping players such as Andrew Flintoff and James Anderson. 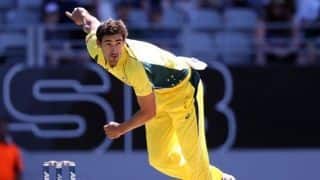