Australia’s David Warner has dominated attacks all over the world expect the West Indies shockingly. Warner who has played two Test series against the Windies averages on 26.9, which is also his lowest against a Test playing nation. Warner has managed just 98 runs in the two Tests in the Caribbean in June, with 62 coming in the second innings at Jamaica. From the five Tests he has played against West Indies he averages just 26.9, all matches played in Caribbean which is well way below his career mark of 50.48. Warner who is going through a purple patch made 592 runs at 98.66 in the Trans-Tasman 2015 series against New Zealand, will look to undo all his wrong doing and over come that low average of his, with the first Test starting in Hobart on Thursday.

Warner has been a sort of bunny for the West Indian fast bowler Jerome Taylor. Taylor in the last series against Australia picked up Warner 3 times, twice at Dominica and Jamaica. “They’re going to come real hard in the first session, that’s what we expect,” Warner said of Windies new-ball pair Taylor and Kemar Roach on Sky Sports Radio. “We expected that in the West Indies as well and that’s what they did. “They got early wickets against us then we had to play a sensible game, trying to playing straight and battle the conditions over there. The conditions over here are a little more in favour of the batsmen, you can play your shots, but they’ve got pace, they’ve got spin on their side,”added Warner. ALSO READ: Australia wary of West Indies despite latter’s poor show in tour match: Peter Siddle

In both the Test matches played in June, Australia found themselves in a spot of bother all thanks to Taylor early wickets as openers Warner and Shaun Marsh making partnerships of 13,42 and 0 before producing a 117-run stand in the second innings at Jamaica. Taylor picked up both Warner and Marsh to leave Australia tottering at 16-2 before finishing with six for 47 in his 25 overs picking key wickets of Steven Smith, Adam Voges, Shane Watson and Brad Haddin. “Jerome Taylor likes to get it full and swings the ball. A high percentage of his wickets are pretty much caught behind so that’s something we have to take note of,” Warner said. “Roach is also a very good bowler, he can swing it away and angles it into the right hander. We’ve got to be on top of our game as well. Don’t take it as gospel that we’ll beat them comprehensively, because we know what they’re like,” explained Warner.

With West Indies losing the tour game against a young Cricket Australia XI in a horrible manner Warner said that the Australia will come hard and show no mercy to the visitors. “We have to come out and execute our skills as well as we can,” Warner said. The only positive for the visitors was captain Jason Holder’s performance, who took 4-76 before top-scoring in the second innings with 65. ALSO READ: Australia’s pace obsession ahead of West Indies Test series puzzles Courtney Walsh

“You wouldn’t believe he’s 24, he’s got a good calm head on his shoulder,” Warner said. “He’s a quiet guy who is always calm. His batting can be phenomenal. He is tall, puts the ball on a length, not overly fast but gets the job done. He’s going to be their workhorse this series, says Warner.

It will also be the first time since August 2013 that Australia fields an attack without a left-arm fast bowler.  “Obviously we’re missing (Starc) and with Johnson retiring, it’s going to be a big thing for us,” Warner said. “But at the end of the day we’ve got a lot of bowling stock around the country and the guys they’ve brought into the team are great bowlers with great records,” concluded Warner. Gary Kirsten to be sacked as Delhi Daredevil’s coach: Reports 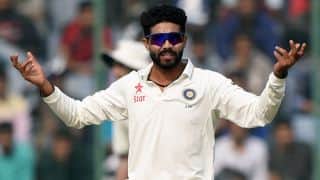