Cricket Australia will send 14 of the country’s most talented young cricketers to the MRF Academy in Chennai this month to train under the tutelage of Australian cricket icon Glenn McGrath.

McGrath, Australia’s most successful pace bowler, in his role as director of the MRF Pace Foundation, will work with CA’s National Performance Squad from August 10-28. Among the batch of Australian cricketer set to fly to India are Ben McDermott, capped in eight T20Is, and Lloyd Pope, the former Australia Under-19 World Cup spin bowler who in 2018 became the youngest player in the 126-year history of the Sheffield Shield to take seven wickets in an innings.

While in Chennai for two and a half weeks, the NPS will play three one-day matches and three T20s against MRF Academy teams.

Among the 14 are a few successful young players from the Big Bash League, such as Sydney Sixers’ Josh Phillipe, and a few current U-19 cricketers in Oliver Davies, Lachlan Hearne, Todd Murphy and Jake Fraser-McGurk.

“Australian Cricket has enjoyed a mutually beneficial relationship with the MRF Foundation for 26 years and we value the chance to take some of our young players to India to give them the chance to stretch themselves under match conditions,” he said in a CA release.

“The pace bowlers will also have the opportunity to interact with Glenn who has a wealth of knowledge about bowling and can certainly assist them to expand their skills. The squad has a nice blend of youth and some more experienced members, so the coaching staff of Chris Rogers and Craig Howard will have plenty of options to work with.” 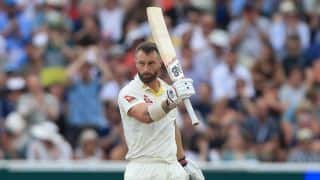