Fast-rising Azhar Ali and veteran Younis Khan hit half-centuries to put Pakistan on course for taking a big lead in the second cricket Test against Sri Lanka at Dubai Stadium here on Thursday. 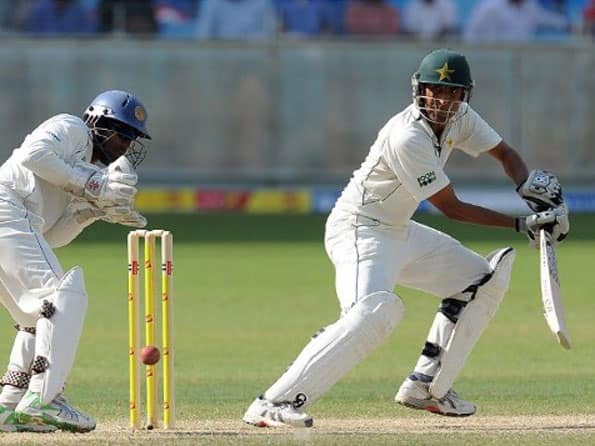 Fast-rising Azhar Ali and veteran Younis Khan hit half-centuries to put Pakistan on course for taking a big lead in the second cricket Test against Sri Lanka at Dubai Stadium here on Thursday.

The pair put on 117 for the third wicket to take Pakistan to 182-3 in their first innings by tea on the second day, needing just 57 runs to overhaul Sri Lanka’s 239 in their first knock with seven wickets intact.

Ali was on 58 at the break and Misbah-ul Haq unbeaten on one after Dhammika Prasad led Sri Lanka’s figthback by dismissing openers Taufiq Umar (27) and Mohammad Hafeez (33) in successive overs.

Ali was the first to reach his half-century as he lifted left-arm spinner Rangana Herath twice in as many overs to extra-cover boundary before back paddling the same bowler for his sixth boundary overall to cross 50.

He now has 11 half-centuries in 15 Tests, without converting any of them into hundreds. Ali also became the 49th Pakistani batsman to complete 1,000 Test runs when he reached 46.

Younis hit Tillakaratne Dilshan over deep mid-wicket boundary for a six to complete his fifty, but in the Sri Lankan captain’s next over he played onto his stumps. His 55 also included two boundaries.

Pakistan started slowly after resuming at 42-0 and benefited from two drop catches off successive deliveries from paceman Suranga Lakmal, who bowled exceptionally well in the morning session.

It was the fifth over of the day when Lakmal got one to jump on Hafeez whose tentative push ballooned towards cover where Dilshan failed to catch the ball which fell behind him. Hafeez, on 25, went for a single.

But both openers failed to take advantage of the lapses, with Umar edging Prasad to wicket-keeper Kaushal Silva for his first catch in Tests while Hafeez was adjudged leg-before in Prasad’s next over.

The first Test ended in a draw at Abu Dhabi. The third and final Test of the series will be played in Sharjah from November 3-7. (AFP)