A British passport helped Azhar Mahmood get into the Indian Premier League this year and now the former Pakistani all-rounder is keen to see that the players from his native land are not denied the chance to play in the Twenty20 league for long. 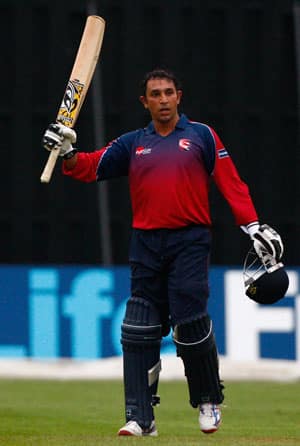 A British passport helped Azhar Mahmood get into the Indian Premier League this year and now the former Pakistani all-rounder is keen to see that the players from his native land are not denied the chance to play in the Twenty20 league for long.

Pakistani cricketers have not played in the league since featuring in the inaugural edition in 2008 due to strained diplomatic relations between the two countries in the wake of Mumbai terror attack.

IPL Franchisees have avoided picking Pakistani players since then and Mahmood was selected this year since he is now a UK citizen.

Mahmood urged the BCCI and PCB to sort out all the issues to pave the way for the participation Pakistani cricketers in the highly popular league.

Mahmood will feature in the fifth edition of the league for Kings XI Punjab.

Mahmood, who last played for Pakistan in 2007 cricket World Cup, believes that his participation in the IPL may contribute in normalising the strained relations between the two nations.

“I believe that my playing for the Kings XI Punjab team would lead to IPL franchises situp and take notice of Pakistani cricketers as that would help in normalisation and resumption of bilateral ties. Don’t deny them the chance to play in the IPL,” he added.

Rejected last year from being put on sale by the IPL Governing Council, Mahmood said, “I don’t know why it took me so long to qualify for the IPL auction. I have no idea what happened last year. This year, I got listed as a British player and picked by Kings XI team. May be there were some doubts in the minds of franchises,” he said.

Mahmood, who joined English county team Kent in 2010, has been consistently doing well in the English conditions and believe that his experience of playing there would hold him in good stead in the IPL-V.

“My county experience will definitely help me in the IPL.

I have been playing county cricket for past seven years and now I am also part of the Bangladesh Premier League, so I will bring all my experience and talent into play while turning up for Kings XI Punjab.

“I am very excited about it. It feels really great to be associated with a tournament like IPL as it is the biggest tournament after international cricket. I always wanted to feature in the League,” he said.

Mahmood, who has more than 2000 runs in the T20 format, also plays for Auckland Aces in New Zealand and considers his match-winnng knock of 44 in his team’s 44-run victory over Canterburry in the HRV cup final as one of the special knocks of his career.

“I had a great Twenty20 season both in England and New Zealand. We won the HRV cup finals where I performed very well. I am confident of doing well in IPL too,” he said.

Mahmood played for Surrey before joining Kent in 2007. (PTI)