Babar Azam Opens Up On His Record Breaking Run In ODIs, Reveals His Mantra For Success

Babar Azam Opens Up On His Record Breaking Run In ODIs, Reveals His Mantra For Success

Babar ended the ODI series as the second highest run getter with 181 runs in 3 games, including a century and half century.

New Delhi: Pakistan skipper Babar Azam was in scintillating form in the recently concluded three-match ODI series against the West Indies. The skipper broke numerous records in the series and helped Pakistan clean sweep the visitors. Babar scored a brilliant century in the first ODI and became the first batter in the history of the game to hit three consecutive tons in ODIs twice. He also became the fastest batter to score 17 ODI tons and the fastest to 1000 runs as skipper.

The ODI series was a one-sided affair where the hosts outplayed the Men in Maroon. While West Indies had their moments, they failed to capitalise and allowed Pakistan to make a comeback. In the final ODI, Pakistan was tottering at 117-5 and it looked like the West Indies will finally break their losing streak. However, Shadab Khan held the fort for the team and played a brilliant knock of 86 to take Pakistan to 269, which proved to be too much for the West Indians. They were bowled out for 216 as Pakistan completed a tour whitewash. Shadab was the hero with the ball as well and picked up four wickets to rattle the West Indies batting. He was adjudged the ‘Player of the Match’ for his all-round show.

Before the ODI series, the Men in Green clean swept the Nicholas Pooran-led side in the T20I series as well. 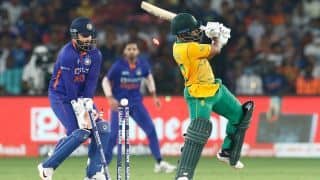