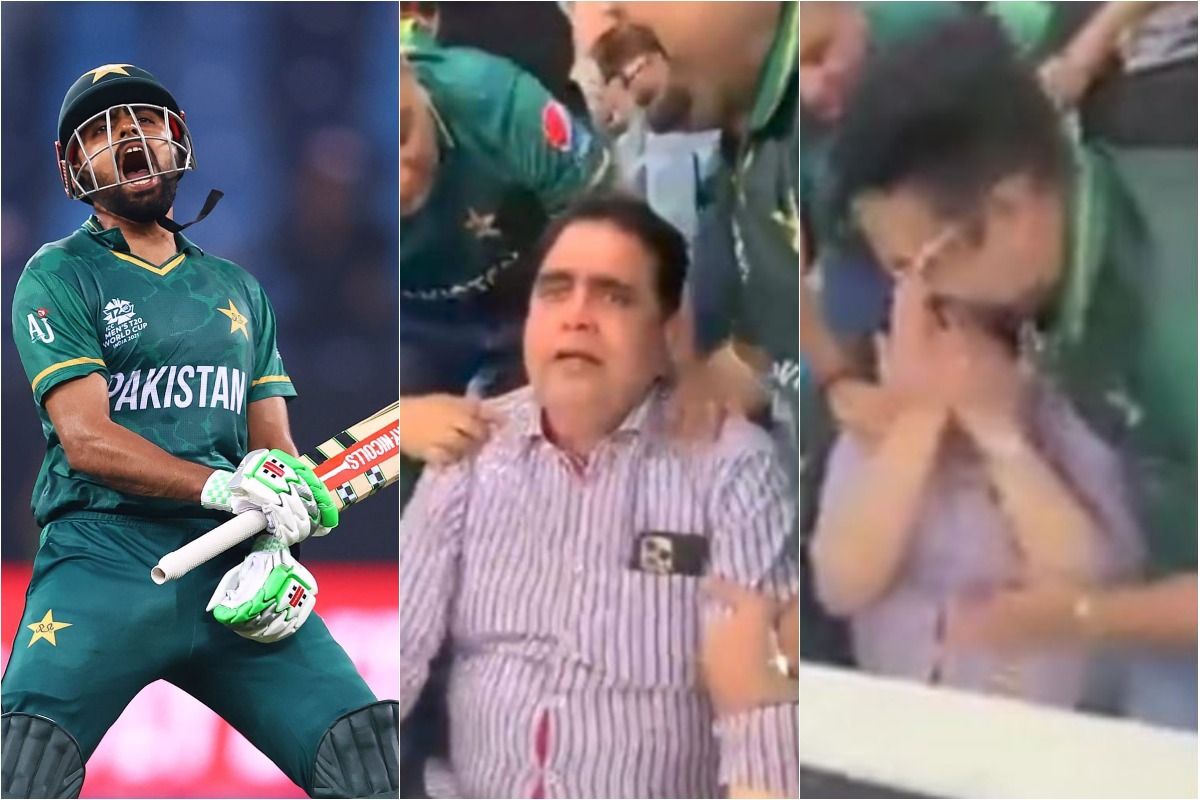 Delhi: Leading from the front, captain Babar Azam maintained exemplary calm and subtle approach as he guided Pakistan to a historic 10-wicket win over India in Group 2 match of Super 12 stage of the ICC T20 World Cup at the Dubai International Stadium on Sunday. Pakistan’s magnificent win broke the 29-year-old jinx of not winning a match against India at the World Cups. Overjoyed and ecstatic with the victory of such magnitude, Babar Azam’s father – Azam Siddique – broke into tears following Pakistan’s memorable triumph over their arch-rivals.

The 27-year-old Babar, who scored a brilliant half-century (68 not out off 52 balls) stitched an unbeaten 152-run alliance with wicketkeeper-batter Mohammad Rizwan (79*) as Pakistan crush India to claim top spot in Group 2 standings of T20 World Cup 2021. Chasing a 152-run target, Babar and Rizwan made Indian bowlers look pedestrian as they steered their team over the line with 13 balls to spare in Dubai. Seeing his son’s brilliant knock, Babar’s father couldn’t control his tears and broke down. In the video, he was seen getting congratulated by a plethora of fans and friends.

This is Babar Azam’s father. So happy for him. I first met him in 2012 at Adnan Akmal’s walima. Babar at that time was 3 years away from Pakistan debut. I clearly remember what his father told me “bas debut ho jane do. Agay sara maidaan babar ka hai” pic.twitter.com/ZlsvODQkSg

Electing to bowl first, Pakistan restricted India to 151/7 in 20 overs with Shaheen Shah Afridi rattling the 2007 champions with a two-wicket burst. India captain Virat Kohli struck a fighting fifty but India never recovered from the early setback and could not manage a big score.

It was a night where nothing went wrong for Pakistan. Chasing 151, Pakistan got off to an impressive start with 43 runs for no loss in power-play. Rizwan began by carting Bhuvneshwar Kumar for back-to-back boundaries in the opening over. In the next over, Azam started off with a glorious back-foot drive off Mohammed Shami. Shami came under attack in the fifth over as Azam and Rizwan took a four each.

Interestingly, this is also Pakistan’s maiden victory over India in a World Cup match and only their second out of 9 games in the shortest format of international cricket.

This was also Pakistan’s first T20I win by 10 wickets over any opposition and the highest opening stand against India in the format.

The loss is not only India’s first at a World Cup to Pakistan, but is also their first-ever 10-wicket defeat in T20 internationals.