Yuzvendra Chahal's record of best T20I figures by an Indian bowler was broken on Sunday by pacer Deepak Chahar. 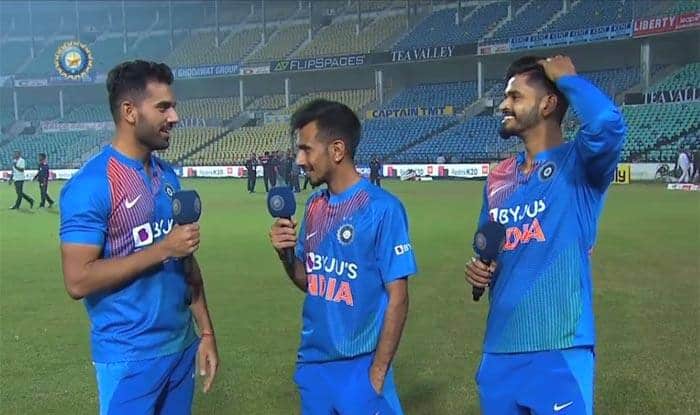 Yuzvendra Chahal’s record of best T20I figures by an Indian bowler was broken on Sunday by pacer Deepak Chahar whose excellent show helped the hosts to a 2-1 series win in Nagpur. Chahar returned figures of 6/7 as India beat Bangladesh by 30 runs in the third and final match for their first home series win in 2019.

During his spell, Chahal also became the first Indian male cricketer to record a T20I hat-trick as well.

During the customary interview on ‘Chahal TV’, a fun interview section hosted by the India legspinner Chahal himself, he took a playful dig at his teammate calling him a ‘rascal’, for breaking his record. “He broke my record today. Bade he besharam aadmi ho yaar tum (you are such a rascal, man),” quipped Chahal as he introduced Chahar, who was chosen as both the player of the match and of the series too.

Speaking of his performance, the 27-year-old revealed he wasn’t aware of his hat-trick as the first wicket in that run came off the final delivery of his previous over. “I feel amazing. Even while sitting at home, you won’t think about taking 6/7. You may imagine taking a five-wicket haul but not this kind of performance,” he said.

When asked about his strategy, Chahar said playing for Chennai Super Kings (CSK) in IPL has given him enough experience to deal with the conditions when the ball gets wet. “The boundaries either side of the wicket are big here (Nagpur). So making the batsman play in that area was the aim apart from varying pace. Gripping the ball was a bit difficult due to the dew but I’ve played enough in Chennai to know how to deal with the wet ball,” he explained.