After a blip in the last game, Chris Gayle and Royal Challengers Bangalore got back their mojo to beat Chennai Super Kings handsomely and move to top of the league table. 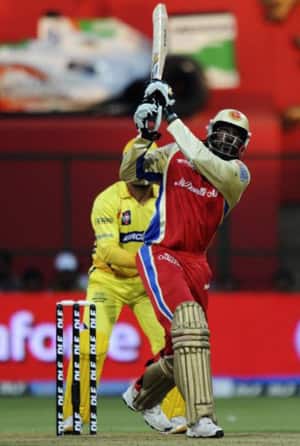 After a blip in the last game, Chris Gayle and Royal Challengers Bangalore got back their mojo to beat Chennai Super Kings handsomely and move to top of the league table. Both teams had already secured their places in the knock-offs, and the only interest in this match was to see which team would go to No 1. RCB did that with much more determination than CSK, keeping their opponents to 128 and then easing home by eight wickets thanks to another unbeaten half-century from Gayle.

MS Dhoni s 70 was the highest score for a restless CSK by some margin; only one other batsman reached double digits and the 48 that Dhoni hit in boundaries were more runs than what nine other players managed collectively.

The difference that Daniel Vettori and Zaheer Khan make to the RCB attack was felt inside the first six overs, when the experienced pair accounted for three wickets. Zaheer extracted Michael Hussey with a full ball and Suresh Raina with a short one, and after Sreenath Aravind prized out Murali Vijay with one that moved away, Vettori struck to dismiss Subramaniam Badrinath for a ten-ball 0.

Twenty-two for four was not what Dhoni expected to walk out to. Vettori stemmed the flow of runs with typically canny bowling and with Aravind bowling a very good first spell (3-0-11-1), Dhoni and Wriddhiman Saha trained their attention on Chris Gayle. Dhoni started off by welcoming Gayle with a hit over long-on and Saha followed by slog-sweeping six over midwicket.

Saha s aggression didn t last long as he pulled an ordinary delivery from Virat Kohli to the deep, and Vettori (4-0-15-2) came back to immediately unsettle Dwayne Bravo with an arm ball. Albie Morkel also fell trying to go hard at the ball, and with wickets falling regularly Dhoni was the only one who managed to connect cleanly. He looted 17 of the final over, bowled by Abhimanyu Mithun, and without his unbeaten 70 CSK would have folded for much less.

A target of 129 was just too little, in the end. RCB s first three overs were muted, with AB de Villiers stumped off Ravichandran Ashwin for 0, before Gayle exploded with two sixes off Doug Bollinger in the fourth. Ashwin was played watchfully by both Gayle and Kohli, but Bollinger was taken for 30 off three overs. Raina s first over went for 18 as Gayle and Kohli took toll of some easy fodder.

Kohli s innings came to an end on 31 when he turned Morkel to short fine leg, and for a couple overs the boundaries dried up. That didn t stop Gayle from reaching his half-century off 34 balls, and once the landmark was reached victory wasn t too far away.

IPL is far from reality: Oram