For a short period around Tamim Iqbal s first-over dismissal and then after the wicket of Junaid Siddique when Shahriar Nafees struggled to get going, one would have thought that Netherlands could have run Bangladesh close. 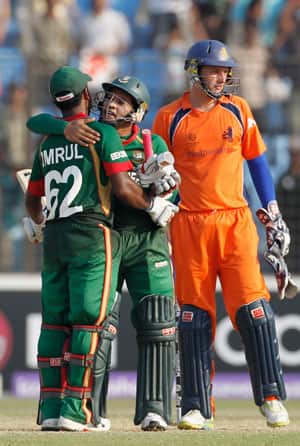 For a short period around Tamim Iqbal s first-over dismissal and then after the wicket of Junaid Siddique when Shahriar Nafees struggled to get going, one would have thought that Netherlands could have run Bangladesh close. Each time, Imrul Kayes calming influence at the crease did its job of absorbing the pressure and guiding Bangladesh to a comfortable win over Netherlands.

Chasing 161 for a win was not going to be too difficult a task, but Iqbal s dismissal in the very first over from Mudassar Bukhari could have given them the jitters. However, once the initial five overs had been played out by the Bangladeshi side, the batting became much easier and the inevitable dropping of the Dutch shoulders followed.

30 came off the first ten overs but with both Kayes and Siddique doing well to play without too much fear, there were 34 that were scored in the next five.

Both batsmen matched each other shot for shot and when Netherlands best bowling option Ryan ten Doeschate went for 24 in his first four overs, the game looked to have slipped away from their grasp.

Peter Borren was greeted to the bowling crease by Kayes with a couple of boundaries and by the time, he had extracted the revenge by getting Siddique out, Bangladesh had already reached 92.

Nafees looked nervous when he came to the crease, but after batting for 24 for his four runs, he got his confidence back by smacking Bukhari to the boundary. There was no looking back after that and he went on to make a 60-ball 37.

Kayes remained unbeaten at the other end on 73 and as Bangladesh survived some nervous moments in the end to clinch the game in the 42nd over for the loss of four wickets.

Earlier, Netherlands were bowled out for a paltry score of 160, 22 balls before the close of their stipulated close of the innings. While the jury may still be out on whether they made the right call by batting first, there cannot be too doubt about the manner in which they batted.

The top-order struggled against the pace of Shafiul Islam and failed to score too many in the first ten overs. By itself, that shouldn t have mattered too much given that they hadn t lost a single wicket till the ninth over. However, one felt that the issue was accentuated thanks to some mindless slogging by the top-order, which, when it did not come off, added to the mounting frustration and made things difficult for them.

What added to their predicament was that the batsmen got starts to the innings but failed to convert them into something bigger. There was a scratchy 28 from Eric Szwarczynski, another 29 from Tom Cooper and 18 by Alexei Kervezee but all three were dismissed in manners that would have frustrated the Dutch supporters.

There was a late half-century from Ryan ten Doeschate, but without too much support at the other end, the Dutch were bowled out before time.

Abdur Razzaq had three wickets to his name but it was the bowling of Shafiul Islam that pushed the Dutch off the cliff.

Man of the Match: Imrul Kayes.