Taskin Ahmed and Arafat Sunny of Bangladesh have been reported for suspect action by ICC, during the ongoing T20 World Cup 2016 in India.

Bangladesh bowlers Taskin Ahmed and Arafat Sunny were on a the bitter end of controversy after being reported for suspect action by ICC officials, which left the Bangladesh team in anguish. The duo who played for their side against Netherlands in the first round match of the ICC World T20 2016 will now have go for a test for their actions within 14 days of the report. Bangladesh coach Chandika Hathurasingha told the media that the team had received the official word from match officials after the match saying that they were “concerned” about the actions of the right-arm fast Taskin Ahmed as well as left-arm orthodox Sunny. FULL MATCH SCORECARD: Bangladesh vs Netherlands , Live Score, 3rd T20 Match, Group A, ICC T20 World Cup 2016

Hathurusingha showed concern and anguish about the ICC’s decision to report his team’s bowlers and was also not impressed by the timing of the report. He felt that it was strange because the pair has been bowling “the same way for the last 12 months”.

“If they have a concern about my bowlers, I have a concern about their [ICC’s] actions as well,” Hathurusingha was quoted as saying by ESPNCricinfo. “I don’t see anything wrong. They have bowled the same way as the last 12 months. As you said if they [the ICC officials] have officiated the matches they have been playing, they must have seen something different yesterday. That’s all I can say,” he added.

Meanwhile, the issue was brought up by the on-field umpires to the match referee, who conveyed it to the team. When questioned about how this incident will affect his side now, Hathurusingha said that his bowlers will not change their actions. “It’s about how you take it,” Hathurusingha said. “As bowlers they are strong enough to understand what they are doing is right. We also think that we have no concern. They have played so much cricket, recently as well. It is a surprise for us. We have to take their concerns. They are only concerns at this stage. I don’t think it will affect the way we are playing, “ he explained. In Hathurasinghe’s views, his bowlers were ‘clean’. 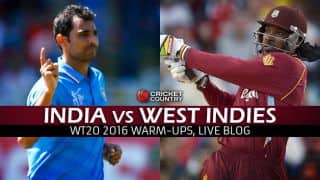