Security was a serious threat in Bangladesh that prevented Australia from touring them in 2015.

Security was a serious threat in Bangladesh that prevented Australia from touring them in 2015. In fact, Australia did not even send their Under-19 team to participate in the World Cup a few months later. Eoin Morgan and Alex Hales pulled out of England s squad when they toured Bangladesh last year. Happy with the security arrangement, Australian finally toured the nation after 11 long years. All was smiles for Bangladesh. They won the First Test but now an untoward incident seems to have taken precedence. A stone was pelted at the Australian team bus after the first day s play in the second Test at Chittagong. No players were injured but it did manage to break the glass. ALSO READ: Australian team bus hit by stone in Chittagong

Bangladesh Cricket Board (BCB) has not taken the incident lightly and issued a statement on Tuesday. A BCB release stated, The Bangladesh Cricket Board (BCB) is aware of the report of damage to a window of the Australia Cricket Team s bus while returning to the hotel from the Zahur Ahmed Chowdhury Stadium in Chittagong following the end of play on day one of the second Test on Monday.

BCB will investigate the matter with utmost seriousness and the release stated that Australian team management continues to be happy with the security arrangement.

The BCB has taken this matter with utmost seriousness and a high-power committee has been formed by the concerned security agencies to investigate and find out the facts.

The Board has been in constant communication with the Australian Cricket Team management. As added assurance, security measures have been enhanced on the travelling route of the teams. The Australia Cricket Team has expressed its satisfaction and comfort with the security operation in place and has appreciated the response from the BCB and the local authorities following Monday s incident, it added. 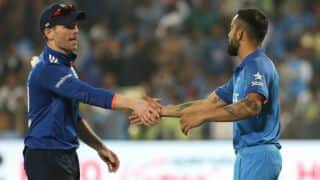