The post-tea session turned out to be a total collapse for Zimbabwe as they could only get up to 240.

Bangladesh kept their momentum high on the first day of the first test against Zimbabwe at the Sher-e-bangla stadium in Mirpur as they clearly had the upper hand and last laugh at stumps. Zimbabwe, who were bowled out for 240 failed to capitalise over their batting and kept losing wickets at regular intervals.

Zimbabwe skipper, Brendan Taylor won the toss and elected to bat first. But the decision failed to go in their favour as they lost two quick wickets in the first session, i.e. before lunch and scored just 77. However, the post-lunch session was expected to be better as opener, Sikandar Raza and skipper, Brendan Taylor were expected to fire and steer the Zimbabwean innings to a good total. But unfortunately, it never happened. Taylor was the first to be dismissed in the second session of the day, followed by Raza, who seemed to be in good form after scoring 51, but failed to convert it to a big score. Followed him was Elton Chigumbura as they lost three wickets in the session with just above hundred runs added to the total.

The post-tea session turned out to be a total collapse for Zimbabwe as they could only get up to 240 and ended up getting bowled out. The batsmen completely failed to capitalise as wickets kept tumbling one after the another with no other batsmen looking as promising as Sikandar Raza.

However, the star attraction of the day was Bangladesh’s star all-rounder, Shakib Al Hasan, who made a comeback to international Test cricket after serving a ban by the Bangladesh Cricket Board (BCB), claimed six wickets for 59 and completely turned the game in the favour of Bangladesh as they took total control over Zimbabwe. Among the other wicket takers were Jubair Hossain, Taijul Islam and Shahadat Hossain.

Bangladesh too lost an early wicket at the start of the innings when Tamim Iqbal was dismissed for cheap five runs off Tinashe Panyangara. However, Bangladesh have maintained a composed gameplay till the end of Day One as the score stands 27 for the loss of only wicket of Iqbal. 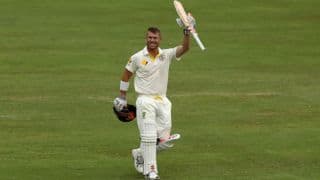 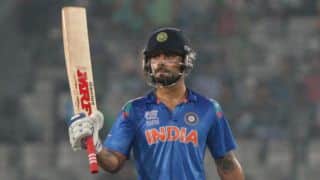 Virat Kohli and others with 20 ODI hundreds