West Indies pacer Tino Best took three wickets to leave Bangladesh tottering at 85/5 at tea on the fourth day of the second and final Test in Khulna on Saturday. 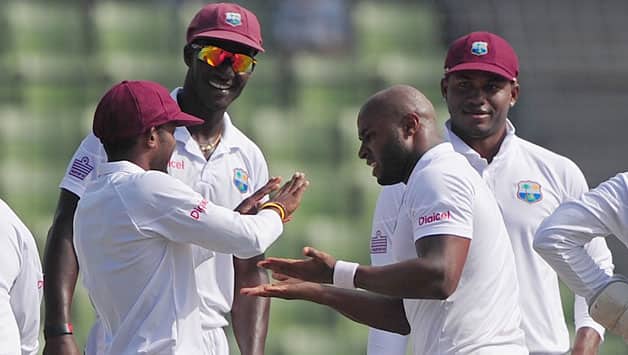 West Indies pacer Tino Best took three wickets to leave Bangladesh tottering at 85/5 at tea on the fourth day of the second and final Test in Khulna on Saturday.

The 31-year-old jolted Bangladesh’s second innings after coming in at second change to push the home team towards an innings defeat after the West Indies declared at 648/9, taking a 261-run lead after the first innings.

Shakib Al Hasan was unbeaten on 20 and Nasir Hossain was one not out, with Bangladesh needing another 176 runs to avoid an innings defeat.

Best has given the West Indies a good chance of wrapping up the two-match series 2-0 after they took the first Test in Dhaka by 77 runs.

Bangladesh were off to a disastrous start when opener Nazimuddin was trapped leg-before for nought off pacer Fidel Edwards’s third ball of the innings.

Iqbal and Nafees took the score to 49 with the help of eight boundaries between them before Best was introduced.

Earlier, Shakib became only the second Bangladeshi bowler to complete 100 wickets in Test cricket as he dismissed four batsmen in the morning session to end the tourists’ innings.

West Indies batsman Shivnarine Chanderpaul remained unbeaten on a brilliant 150. The experienced left-hander held the innings, hitting 12 fours and a six off 282 balls. He also hit 203 not out in the first Test.

Shakib helped Bangladesh halt the West Indian progress after they resumed at 564-4.

It was the West Indies’ highest total in a Test against Bangladesh, improving on the 559-4 declared they managed at Kingston eight years ago.

He then removed Permaul (13) and Sunil Narine in the last over before lunch.

Left-arm spinner Mohammad Rafique was the only other Bangladeshi bowler to get 100 wickets in Test cricket.