Stuart Binny and Mohit Sharma took seven wickets between them.

Stuart Binny turned the game on its head in the second One-Day International (ODI) between India and Bangladesh at Dhaka. Binny had figures of 3-2-2-3 after his first three overs. Mohit Sharma got rid of Shakib al Hasan and Ziaur Rahman to reduce Bangladesh to 54 for seven.

Binny was rewarded for some tight bowling as he bowled two consecutive maiden overs, the second of which also saw the back of Mushfiqur Rahim, caught behind by Wriddhiman Saha. Shakib al Hasan was the new man in for Bangladesh.

Earlier, The opening bowlers Mohit and Yadav kept things tight and got good movement off the pitch to keep the Bangladeshi batsmen quiet. Yadav especially was getting the ball to move at good pace. Mohit continued his good IPL form, and was economical. Mohit had impressive figures of two for 13 after five overs.

The batsmen, Rahim and Mithun, were circumspect initially, but opened up once they got set. Mithun Ali struck five boundaries, and Mushfiqur one as Bangladesh got to 39 for two after 10 overs.

Earlier, Mohit Sharma struck early, getting rid of Tamim Iqbal off the second delivery off the innings to put Bangladesh on the back foot early on. Mohit was hit for a four first ball, but got his revenge immediately. He got rid of Anamul Haque, caught at point, soon after. Umesh Yadav continued, bowling quick but straying on the leg stump a little too often. The pair helped India reduce Bangladesh to 19 for two after five overs. 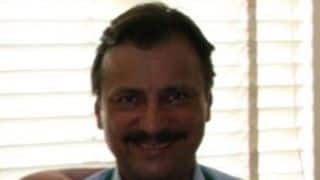