Sabbir Rahman who has been into off-field controversies every now and then has regained his place in the team.

Bangladesh have announced a 16-man squad ahead of the 3-match series against West Indies. Bangladesh have made major changes from the squad that was picked during the last tri-series against Zimbabwe and Sri Lanka. Liton Das has been excluded from the squad, making way for Imrul Kayes. The others who have missed out from that squad are Nasir Hossain, Abul Hasan, Mohammad Saifuddin, Mohammad Mithun and Sunzamul Islam. They have been replaced by Mosaddek Hossain, Nazmul Hossain, Nazmul Islam, Abu Hider and Abu Jayed.

The good thing for Bangladesh is the return of Mustafizur Rahman, who missed the last series due to an injury he sustained in the Indian Premier League. Sabbir Rahman, who has been into off-field controversies every now and then, has regained his place in the team. The ODI series is scheduled to begin from July 22 soon after the culmination of the two-Test series. 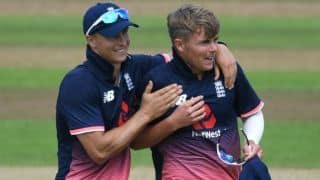 England vs India: Sam Curran to replace his brother in T20I squad