The Cricket Association of Bengal (CAB) has sent an invitation to Shiekh Hasina for the second India-Bangladesh Test next month.

The Cricket Association of Bengal (CAB) has sent an invitation to Bangladesh Prime Minister Sheikh Hasina to watch her country’s Test match against India at the Eden Gardens from November 22-26, sources in the association said.

It has been learnt that CAB has also sent invitation to Prime Minister Narendra Modi but it couldn’t be confirmed from the CAB sources.

“I can confirm that an invitation has been sent to Bangladesh PM Sheikh Hasina’s office some time back. However in case of our Honourable PM, BCCI president-elect Sourav Ganguly is looking into it. I cannot confirm or deny the development,” a senior CAB official told PTI on conditions of anonymity.

It will be an interesting picture of cricket diplomacy if the two leaders are seen watching the game from VVIP Box of Dr BC Roy Club House. 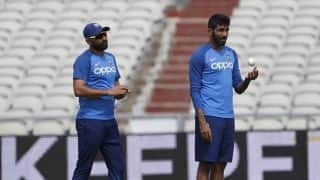