Dubai: Senior Pakistan batsman Mohammad Hafeez on Saturday became the first cricketer to refuse to play alongside Mohammad Aamer. The tainted but cleared paceman will feature for Chittagong Vikings in the Bangladesh Premier League starting from Wednesday — a team Hafeez said also asked him to join. “I was approached by my agent to play for the  Chittagong team but when I knew that Amir was also in that team so I refused it point blank,” Hafeez told AFP. “I have no personal issues with Amir or Chittagong, it’s my personal opinion that I can’t share the dressing room with someone who hurt my country’s integrity.” Bangladesh Premier League 2015 inaugurated amidst disorder

Hafeez added: “If any other team makes me an offer then I will play the league and I have no problems facing Amir as I have played against him in the domestic matches but can’t be in the same team,” said Hafeez, a former Pakistan Twenty20 captain. Pakistan Cricket Board (PCB) chairman Shaharyar Khan had admitted some senior players were against Amir and other two — Salman Butt and Mohammad Asif.

The trio was caught in a spot-fixing scandal on Pakistan’s tour of England in 2010 and were subsequently banned for five years. They were also jailed in Britain. Their sanctions were lifted in September, but the PCB directed Butt and Asif to complete a roadmap only after which they will be allowed to play for Pakistan. But there was worldwide sympathy for Amir because of his age — 18 at the time of the scandal — and for the fact that he pleaded guilty.

But Hafeez is not ready to give his countryman any sympathy. “I had a lot of respect for all three before the incident as they were all talented but after the sordid episode I lost all respect because of their acts,” said Hafeez. “They damaged the hopes and respect of the fans,” said Hafeez. “They were just banned and went away from the fields, it was us who had to bear the brunt. We had to restore Pakistan team’s integrity, restore the confidence of the world because in 2010 there were talks of banning our team from international cricket. We had to suffer the taunts of the fans and after 2010 every act, every defeat and every mistake of ours was seen as suspicious, so we overcame that tough time and will not allow it to happen again.” Asked what if Amir is included in the Pakistan team again, Hafeez said: “We will look at it when it happens, its premature to say anything now.” Mitchell Starc should not get distracted by criticisms, says Glenn McGrath 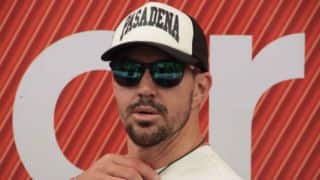 Kevin Pietersen: Mohammad Aamer must not be welcomed back into international cricket