Even if one were to script England s games in this World Cup, it could not have been done better. After winning a thriller against the Dutch, tying with India, losing another close one to Ireland and defending 171 against South Africa, England gave away a winning position to go down to Bangladesh by two wickets. 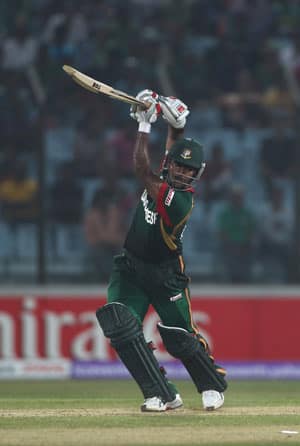 Imrul Kayes was named the man of the match

Even if one were to script England s games in this World Cup, it could not have been done better. After winning a thriller against the Dutch, tying with India, losing another close one to Ireland and defending 171 against South Africa, England gave away a winning position to go down to Bangladesh by two wickets. Shafiul Islam slammed his highest ODI score of 24 and in partnership with Mahmudullah drove the Bangladeshis home to the win with an over to spare.

In the process, the ninth wicket added 58 runs off 56 balls to guide the side to an improbable win.

There was a stark similarity between the two innings, English and Bangladeshi. After a reasonable start, both the sides had lost three quick wickets before the fourth-wicket stand brought them back from the dead. And once the fourth had fallen, it was another capitulation of the kind one is used to seeing when the game is played on a typical slow, low and spinning sub-continental track where one wicket brings a clutter. Except that it was not as bad a wicket.

After Tamim Iqbal had run away to a 26-ball 38 and was helped by Imrul Kayes to a first wicket stand of 52 in even time, it looked like the game was running away from them in a hurry. Fortunately, Tim Bresnan was able to provide his side with a breakthrough when the he managed one to straighten and get through his defences. Junaid Siddique and Raqibul Hasan followed soon after and the side was pushed to 73 for three.

Cool heads were needed and in captain Shakib Al Hasan, Kayes found the perfect foil. With the asking rate having been reduced to almost nothing because of the initial assault, both took their time to get settled. Kayes got to his half century off 91 balls and the partnership yielded 82 runs.

The English had clearly panicked by this time even as the dew began to take its toll. Graeme Swann was the worst-affected and with clear issues with gripping, it soon turned into griping.

It took a run-out for the partnership to break, with Kayes (60) going for a non-existent second run and was found short of his crease. 155 for 4. Shakib had been playing in a collected manner but lost his head to Swann and was bowled for 32. 162 for 5. Mushfiqur Rahim edged one off Shahzad to the keeper. 166 for 6. Naeem Islam bowled by the same bowler without scoring. 166 for 7. Abdur Razzaq threw the kitchen-sink but was only caught at the fence; 169 for 8.

Match over one would think?

The ninth wicket pair of Mahmudullah who had been reselected for this game in place of Mohammad Ashraful, for his batting skills and Shafiul Islam got together and batted with the common sense that seemed conspicuous by its absence amongst the batsmen before them. After a over or so of pottering around, Swann s last over was hit for a couple of fours and a six; 39 needed off eight.

Five off the next couple, but most importantly, no further loss. 34 required in six. Tim Bresnan bowls a maiden to up the pressure. 34 off five. Did I say that the Batting Powerplay had been mandatorily taken now.

And then, James Anderson bowled an over that he has often done in this tournament, and indeed in the ODIs against Australia prior to this. It started with five wides, and followed it up with two more to bring the momentum back in the innings. 22 off 24.

Islam then slammed Bresnan for a couple of fours, 12 off 18. Again, no wickets.

With all other bowlers having finished their spells, it was back to Anderson. A four and three singles ensued. Five off the last two overs. Two crucial wickets in hand and a partnership set. And Shafiul sealed it with a boundary off Bresnan s last ball.

Earlier, England had scraped through to a total of 225 thanks to the usual suspects, Morgan (63) and Trott (67). Trott has been England s sole in-form player in this tournament, continuing from where he had left off in Australia while Morgan, who was substituting for the now-injured Kevin Pietersen, was playing in his first game.

Both came together with the English struggling to get the barrage of the English spinners away and having lost three wickets for 53. A 109-run partnership followed, sandwiched between the two collapses. The second one saw England lost their last seven wickets for the addition of 63 runs, with the half-centuries by the pair followed by Andrew Strauss 18 being the highest score in the innings.

The damage was done by the spinners, who picked up seven wickets amongst themselves with Naeem Islam, Abdur Razzaq and Shakib al Hasan having a couple each.

At that stage, it barely looked like the total was adequate, despite the poor show by Bangladesh with the bat. This was thanks mainly due to the fears that the dew would play a huge part during the English bowling.

Man of the match: Imrul Kayes