Bangladesh kept their hopes alive for a place in the Asia Cup final as they restricted Sri Lanka to a modest 232 in 49.5 overs in the final round robin league match on Tuesday. 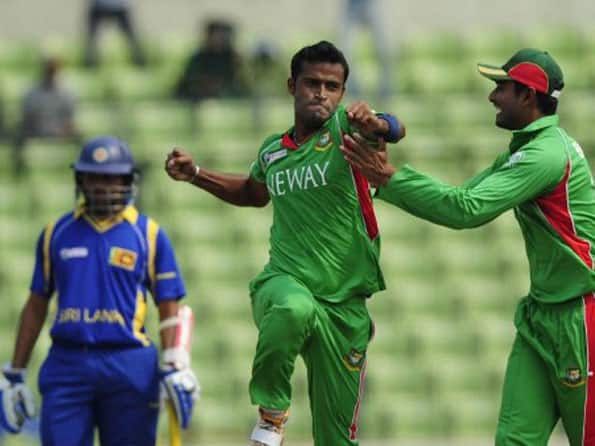 Bangladesh kept their hopes alive for a place in the Asia Cup final as they restricted Sri Lanka to a modest 232 in 49.5 overs in the final round robin league match on Tuesday.

Chamara Kapugedera (62), Lahiru Thirimanne (48) and Upul Tharanga (48) made significant contributions in the middle-order after a top-order collapse saw the islanders reeling at 32 for three in 10 overs.

Comeback man Nazmul Hossain was the pick of the bowlers with figures of three for 32 while left-arm spinners Shakib-al Hasan (2/56) and Abdur Razzaq (2/44) also got important breakthroughs.

Medium pacer Hossain, who was drafted into the playing XI in place of Shafiul Islam, struck triple blow to reduce Sri Lanka to 32 for three within the first 10 overs after Bangladesh captain Mushfiqur Rahim opted to field.

Nazmul, who played his last ODI back in October last year, bowled with lot of control as he rocked the Lankan top-order removing the seasoned trio of Mahela Jayawardene (5), Tillekaratne Dilshan (19) and Kumar Sangakkara (6).

Jayawardene who has played some poor shots in the two earlier matches once again tried to play across the line to a delivery that moved in a shade and breached his defence as his off-stump was dislodged.

Sangakkara played a rank bad shot as he tried to play an expansive cover drive off Nazmul only to be caught by Nazimuddin.

Dilshan hit three boundaries during his brief stay but then inside-edged one on to his stumps as there was minimal footwork from the former Sri Lanka captain.

Rain delays start of the Bangladesh innings in Asia Cup 2012