Did you know? The last 9 Bangladesh batsmen scored only 14 between them, the lowest since 1955.

Bangladesh were bowled out for 43 in 18.4 overs before lunch on Day One after being asked to bat by West Indies at Sir Vivian Richards Stadium, North Sound, Antigua. It was an embarrassing low for Bangladesh, who had just managed to lift themselves to the eighth spot, displacing ironically West Indies. At stumps West Indies were 201 for 2, with Kraigg Brathwaite (88*), Devon Smith (58), and Kieran Powell (48) all having outscored Bangladesh. Here are some numbers from Bangladesh’s embarrassing day at work:

43 lowest total for Bangladesh in Test cricket. Their previous lowest was 62, against Sri Lanka at P Sara Oval in 2007.

46 previous lowest total by any side against West Indies or in West Indies. England faced the ignominy at Port-of-Spain in 1993-94.

112 balls faced by Bangladesh, which makes their effort the sixth-shortest all-out innings in history, the shortest being South Africa’s 75-ball 30 against England at Edgbaston in 1924. The fifth-lowest was Australia’s 111-ball 60, dating only three years back, against England at Trent Bridge.

12 balls needed by Kemar Roach to take his 5 wickets. This is a joint world-record. As per Charles Davis, Monty Noble (against England at Melbourne in 1901-02) and Jacques Kallis (against South Africa at Potchefstroom in 2001-02) have also done this. Roach went wicketless for the first 17 balls of his 30-ball spell.

16 instances of a bowler taking 5 wickets in the first session of a Test, Roach being the most recent entry. Trent Boult (6/32) was the last to do this, against England earlier this year at Auckland. The best figures before lunch remain Stuart Broad’s 8/15 in the Trent Bridge Test mentioned above. Syd Barnes and Frank Foster did this in the same Test. The source, once again, is Charles Davis.

29 balls needed by Roach to take his 5 wickets, the joint-8th in history as per Davis. Ernie Toshack and Broad hold the record, with 19 balls.

6 instances of a team getting bowled out in the first session of a Test. Interestingly, 5 of these have happened in 2010 or later.

58.4% of Bangladesh’s runs were scored by Liton Das, the highest contribution in their history for a batsman in an all-out innings.

14 scored by the last 9 Bangladesh batsmen between them, the joint 4th-lowest in history and the only instance of below 20 since 1955. 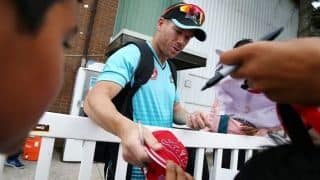