Currently, Bangladesh are 71 for the loss of two wickets in 16 overs with Soumya Sarkar on 17.

Bangladesh batsmen are currently batting good as they look to steady their ship during their chase against defending champions, India, in the 2nd quarter-final of the ICC Cricket World Cup 2015 at the Melbourne Cricket Ground (MCG) in Melbourne on Thursday. Currently, Bangladesh are 71 for the loss of two wickets in 16 overs with Soumya Sarkar on 17 and Mahmudullah on 20. Live Cricket Updates and Commentary: India vs Bangladesh, ICC Cricket World Cup 2015 Quarter-final 2 at Melbourne 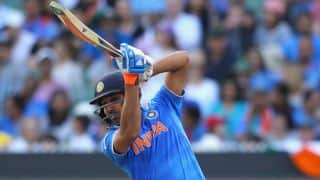