Bangladesh dismissed dangermen Kieran Powell and Chris Gayle to reduce the West Indies to 62/2 at lunch on the second day of the second Test in Khulna on Thursday. 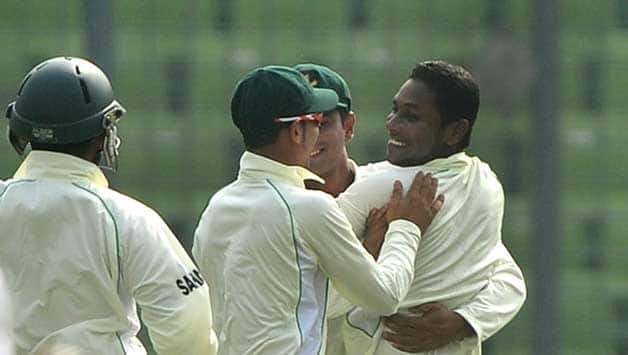 Bangladesh dismissed dangermen Kieran Powell and Chris Gayle to reduce the West Indies to 62/2 at lunch on the second day of the second Test in Khulna on Thursday.

Powell, who scored a century in each innings in the first Test, was caught off a short Rubel Hossain delivery for 13 while Gayle was caught behind off a miscued sweep off spinner Sohag Gazi for 25.

At the interval Darren Bravo (11) and Marlon Samuels (12) were at the crease with the tourists 325 behind Bangladesh’s first innings total of 387.

Earlier, Bangladesh added 22 runs to their overnight score of 365/8 before the last two wickets fell in quick succession.

Abul Hasan, who on Wednesday became only the second man in 135 years of Test cricket to score a debut hundred while batting at number ten, was the last man out, caught in the slip off a short Fidel Edwards’ delivery for 113.

The 20-year-old left-hander hit 14 boundaries and three sixes during his 163-ball knock.

He fell just four short of equalling the highest ever individual score by a number ten batsman set by Walter Read for England against Australia at The Oval in 1884.

His partner Mohammad Mahmudullah was the first wicket to fall in the day, caught and bowled by Darren Sammy for 76.

The Hasan-Mahmudullah partnership added 184 runs for the ninth wicket to lift the home team from a precarious 193/8 on the first day.

It fell just 11 short of the world record ninth-wicket partnership set by South African pair Mark Boucher and Pat Symcox against Pakistan in Johannesburg in 1998.

Edwards was the pick of the bowlers with 6/90, his 12th five-wicket haul in Test matches. Sammy chipped in with 3/74.

The West Indies lead the two-Test series 1-0 on account of their 77-run win in the first Test in Dhaka.