The hosts are in trouble in the second essay after Sri Lanka declared at 730 for six.

Bangladesh lost their opener Tamim Iqbal early in their second innings, as they reached 35 for one at stumps on the third day of the opening Test against Sri Lanka at Dhaka on Wednesday.

The hosts have a humongous task in their hand as they trail by 463 runs in the second essay after Sri Lanka declared at 730 for six.

Rangana Herath claimed the key wicket of the dashing Bangladesh opener, as he had him caught by Dilruwan Perera for 11.

Earlier in the day,  in their reply to Bangladesh‘s first innings total of 232, Sri Lanka were at 602 for six at tea on the third day of the first Test at the Sher-e-Bangla stadium in Dhaka on Wednesday.

Mahela Jayawardene was unbeaten on 146 as the tourists increased their lead to 370 runs with four wickets in hand. This was his 33rd Test century.

Captain Angelo Mathews was dismissed for 86 off 162 deliveries. This was his 14th test half-century. Kithuruwan Vithanage was unbeaten on 32. 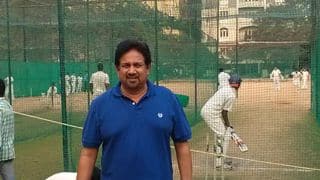