Shahryar Khan conceded that despite hosting the PSL final in Lahore last month the reaction from other Boards to send teams to Pakistan has not been as anticipated.

Karachi: Bangladesh has given a cold response to an invitation from the PCB to play a couple of Twenty20 matches in Pakistan later this year. The Chairman of the Pakistan Cricket Board, Shaharyar Khan admitted that the response from the Bangladesh Cricket Board (BCB) was not very good. “We have asked them to come to Pakistan to play T20 matches. We have assured them the best possible security. We have also invited them to send their security experts to satisfy themselves about the security arrangements. But the response we got from them is not very positive,” Khan said. READ: PCB to take up Indo-Pak bilateral series talk during upcoming ICC meet

The PCB chief conceded that despite hosting the Pakistan Super League (PSL) final in Lahore last month the reaction from other Boards to send teams to Pakistan has not been as anticipated. “They still have their concerns over the security situation in Pakistan,” he added. Khan a former career diplomat said that Pakistan is due to tour Bangladesh in July-August this year for a full series. “We have been to Bangladesh in 2015 while they have not visited us since 2008, so we are thinking about asking them for some compensation as this year’s series we are the hosts according to our agreement,” he said.

He said that since Bangladesh had not played in Pakistan for a while the PCB will seek some compensation before agreeing to send its team to Bangladesh in July-August. “We may ask them to compensate us financially if they want us to tour in July-August this year,” he said. He said Pakistan is not keen on hosting its home series against Bangladesh in UAE because of the poor market response and the PCB could not bear more losses. READ: PCB unhappy with FIA intervening in PSL Spot-fixing matter

Khan said he planned to have separate meetings with the Indian and Bangladesh cricket officials to discuss bilateral relations on the sidelines of the ICC meeting in April. “Even in the meeting itself we intend to push the issue of India not honouring their MoU they signed with us in 2014 to play six bilateral series between 2015 and 2023,” he said.

He said he would also meet with Giles Clarke the head of the ICC’s special task force on Pakistan cricket to discuss bilateral series with other countries particularly India and the proposed World XI tour to Pakistan this year. 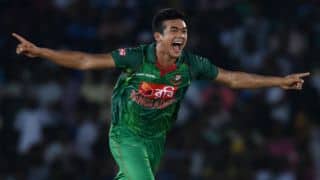