After 19 overs Afghanistan are 53 for three.

Nawroz Mangal, Samiullah Shenwari steadied the Afghanistan ship after Afghanistan were three down for just three runs during their chase of 267 in their very first game of ICC Cricket World Cup 2015 against Bangladesh at Canberra. The pair have already added more than fifty runs for the fourth wicket. Live Scorecard: Bangladesh vs Afghanistan

Afghanistan lost both openers within first two overs of their innings as both Bangladeshi opening bowlers, Mashrafe Mortaza and Rubel Hossain struck early. Mortaza got the wickets of Afsar Zazai and Asghar Stanikzai. Whereas Javed Ahmadi, the other opener got out to Rubel in the second over of the innings. After 19 overs they are 53 for three. Live Updates: Bangladesh vs Afghanistan

Earlier Bangladesh won the toss and decided to bat first. Thanks to couple of blistering knocks by two experienced Bangladeshi batsmen Shakib-al-Hasan and Mushfiqur Rahim have helped Bangladesh to post a competitive 267 in their allotted 50 overs against the World Cup debutant Afghanistan at Canberra. Both teams are playing their opening game of this edition of ICC Cricket World Cup. 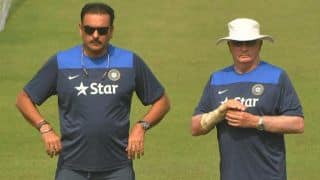 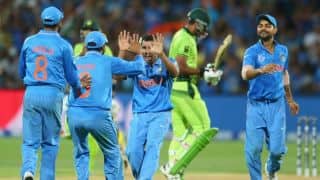