Bangladesh lose the fourth wicket as they reached in 122 for four against Afghanistan in their opening game of the ICC Cricket World Cup 2015. Their star batsman Shakib-al Hasan and former skipper Mushfiqur Rahim are the crease now. Shapoor Zadran took his second and the fourth Bangladeshi wicket in the form of Mahmudullah. Afsar Zazai the Afghanistan wicketkeeper took a good low catch. Live Scorecard: Bangladesh vs Afghanistan

Earlier Bangladesh skipper Mashrafe Mortaza won an important toss and decided to bat first in this day night encounter. Chasing under lights wont be easy on this pitch. Bangladesh included young all-rounder Sarkar in their squad. Bangladesh need to lift their performance to get the result on their favour. The pressure is on Bangladesh to prove themselves. Afghanistan, being the debutants, would look to enjoy their outing and play pressure-free cricket.  The pitch at the Manuka Oval is looking very batting friendly. But the Afghan opening bowlers Shapoor Zadran, Hamid Hassan have extracted some bounce out of the pitch. Live Updates: Bangladesh vs Afghanistan

WICKET! Afghanistan have their 4th wicket & B’desh are in a bit of trouble in Canberra! http://t.co/d5nJSzn4DX #cwc15 pic.twitter.com/fF3MtTtxHh

ICC Cricket World Cup 2015: US Embassy knows the result of the match before it’s over! 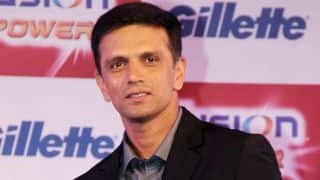