Afghanistan tilted the series to their side by leveling the series while Bangladesh were left traumatised by the visitors' bowlers.

Bangladesh are all set to clinch the series and be the party spoilers of Afghanistan for the final One-Day International (ODI) at Sher-e-Bangla Stadium in Mirpur on Saturday. The live streaming of the match will be available at Gazhi TV. Afghanistan tilted the series to their side by leveling the series while Bangladesh were left traumatised by the visitors’ bowlers. Had the second ODI won by the hosts , this would have been pretty much dead rubber. Bangladesh batsmen did show fire power with their batting especially the lower-order playing the big shots and debutant Mossadek Hossain grabbing all the attention with his all-round skills. LIVE CRICKET SCORECARD: Bangladesh vs Afghanistan, 3rd ODI at Sher-e-Bangla Stadium, Mirpur

But Afghanistan s Mohammad Nabi took the cake away not only with two wickets but with his 61-ball 49 to help Afghanistan level the three ODI series against the No. 7 ranked team. Skipper Asghar Stanikzai has done his duty well rotating his bowlers as per requirement and Bangladesh batsmen have been helpless. If there is anything that Afghanistan want to work on is their batting unit.

Mohammad Shahzad, who has always been at the top with his innings scoring fifty in every ODI match, was found out of form in this series in particular. Rahmat Shah, Hashmatullah Shahidi and Nabi have shown their fire-power with the bat.

As for ODI status for both teams over last five ODI matches, Bangladesh have lost one and won the four while Afghanistan had different story to say as they lost three and won two. How the pitch will turn remains a mystery as it favoured both teams in the last two ODIs. 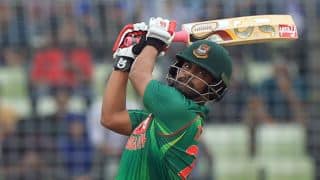 Bangladesh vs Afghanistan, 3rd ODI at Mirpur: Likely XI for the hosts