The hosts begin the tournament in the first qualifying match against Afghanistan.

(Afghanistan challenge the hosts Bangladesh once again but this time in the T20 format. Catch the live updates to know whether the Afghans can pull off another upset)

Bangladesh 78/1 | Overs 12
Anamul 44(33), Shakib 10(12)
An easy win for the hosts in what was being hyped as a tough match after what Afghanistan did to the hosts in Asia Cup. But their batting was below par and the bowlers had nothing much to defend. Nabi did gets some turn. A bit of drama in the last over as Anamul struggles to get that elusive single. And finally on the last ball he smacks it over long-on for a six to complete the win.
Bangladesh 71/1 | Overs 11
Anamul 38(28), Shakib 9(11)
back to back boundaries by Anamul in this over by Aftab Alam. Both legside deliveries and worked away by Anamul. He comes down the track and slaps the ball over mid-off on the last delivery for a four. Just two runs away from a win now.
Bangladesh 56/1 | Overs 10
Anamul 25(24), Shakib 7(9)
Anamul Haque is beaten on the first ball by Shenwari. He picks a single on the next ball. Shakib on the third ball comes down the track and lofts over mid-wicket fielder for a boundary.
Bangladesh 50/1 | Overs 9
Anamul 24(20), Shakib 2(6)
Afghanistan is going too aggressive here. The fourth ball is short and Shakib fails to fend it. Dawlat Zadran tries to have a go at Shakib. Two wides as well in that over.
Bangladesh 45/1 | Overs 8
Anamul 23(19), Shakib 0(2)
Leg-spinner Samiullah Shenwari strikes. Tamim fails to read the line of the delivery and is beaten by the hint of turn as well. The ball hits him low on the front pad. Nigel Llong gives it out. Shakib Al Hasan is the new batsman.
OUT! Tamim 21(27)
Bangladesh 44/0 | Overs 7
Tamim 21(24), Anamul 22(18)
Dawlat Zadran comes over the wicket and Tamim Iqbal pulls the ball ferociously for a boundary past mid-wicket. The fifth ball is pulled by Tamim again for a couple. A trsiaght drive from Tamim on the last ball sees Dawlat trying to hit the stumps and the batsman blocks it. The bowler is too aggressive appealing for an obstructing the field.
Bangladesh 36/0 | Overs 6
Tamim 14(20), Anamul 21(16)
Anamul’s aggressive instincts taking over here. He slogs one from Sadiq over long on. It wasn’t well-timed but got enough distance for a six. On the last ball of the over he comes down and hammers one past midwicket for a four. 13 runs from the over.
Bangladesh 23/0 | Overs 5
Tamim 13(19), Anamul 9(11)
Six of the last ball over wide long on. Slog sweep and Anamul connects it well. He earlier struggled in the over against Nabi’s turn.
Bangladesh 16/0 | Overs 4
Tamim 12(16), Anamul 3(8)
Karim Sadiq comes in to bowl his off-breaks. The third ball goes through the fielder at point for two runs. A leg-bye and two singles on the last two balls.
Bangladesh 11/0 | Overs 3
Tamim 9(11), Anamul 2(7)
Vicious turn there for Nabi. He pitches into Tamim and the ball turns square away on the first three balls. Tamim then picks a single. Anamul picks one as well and a single on the last ball.
Bangladesh 8/0 | Overs 2
Tamim 7(6), Anamul 1(6)
First ball by Shapoor Zadran is slapped through point but the fielder does well to stop it and save three runs. Anamul picks a single by playing towards thirdman. Tamim is beaten on the third ball which breaches his defense. The fourth ball, Tamim hops down and launches the ball past extra cover for a four. The last ball is worked away with a pull shot on the leg for a single. Seven runs from the over.
Bangladesh 1/0 | Overs 1
Tamim 1(1), Anamul 0(5)
The first ball from Mohammad Nabi is played by Tamim towards fine-leg for a single. Anamul struggles as the bowls turns into him and he’s hit on the pads twice.

Afganistan’s 72 all out is overall the 6th lowest total in T20 Internationals. Lowest is Kenya’s 56 vs Afghanistan in 2013

Afghanistan 72 | Overs 17.1
Aftab 0(1)
Zadran comes down the track against Shakib and misses the ball completely, the stumps are in a disarray. This is Afghanistan’s lowest score in T20.
OUT! S Zadran 1(11)
Afghanistan 72/9 | Overs 17
S Zadran 1(10). Aftab 0(1)
Farhad Reza gets a wicket. Dawlat Zadran goes for a wild slog and Mahmudullah does well to sprint back and take that catch. Bangladesh’s overall fielding has been brilliant. Aftab Alam is the last batsman in.
OUT! D Zadran 1(6)
Afghanistan 70/8 | Overs 16
S Zadran 0(7), D Zadran 1(4)
Afghanistan’s innings has been chaotic and it’s facing a slow death. Just one run from that over from Sabbir Rahman (another left-arm spinner!)
Afghanistan 69/8 | Overs 15
S Zadran 0(5), D Zadran 0(0)
Bizarre way to get out. Shafqullah goes for a wild pull, loses his balance and somehow manages to cross his legs over the stumps, Mushfiqur takes a catch after the ball deflected from the batsman’s thighs. Mushfiqur shouts and Nigell Long gives it out! One can surely say Nigell was ‘Wrong’ there! Maiden over form Mahmudullah.
OUT! Shafiqullah 16(16)
Afghanistan 69/7 | Overs 14
Shafiqullah 16(15)
Poor bowling at the start of the over from Razzaq, keeps it short and Shafiqullah rocks on the backfoot and hammers it through midwicket for a four. A similar result ensues on the third ball of the over. However, on the last ball, it pitched in line and straightened, Shenwari was struck plumb in front trying to play across the line.
OUT! Shenwari 1(3)
Afghanistan 60/6 | Overs 13
Shafiqullah 7(10), Shenwari 1(2)
Shakib has been excellent here. His figures after three overs read 3-0-8-2. Just two runs from it.

Afghanistan 58/6 | Overs 12
Shafiqullah 6(6)
The running between wickets has been atrocious. Sadiq goes for the second run with batsman Shafiq laying it towards the edge of the circle. Brilliant throw from Farhad Reza hitting the stumps directly and Sadiq walks back.Second direct hit of the match.
OUT! 10(23)
Afghanistan 54/5 | Overs 11
Sadiq 8(20), Shafiqullah 4(3)
First ball by Mahmudullah is cut by Shafiqullah past point. the fielder at deep cover, does well to sprint and stop the ball with his leg. The batsmen run through for three. On the fourth ball, Sadiq came down the track and was almost out leg-before.
Afghanistan 50/5 | Overs 10
Sadiq 7(16), Shafiqullah 1(1)
Gone, Razzaq comes round the wicket and got the ball to zip in. Nabi failed to read the line of the ball, he went for a drive and is hit on the back thigh. Easy leg-before decision for the umpire. Shafiqullah is the new batsman. Wonder what has prompted Afghanistan to hold back their key batsman Samiullah Shenwari.Disappointing show from Afghanistan so far.
OUT! Nabi 3(9)
Afghanistan 48/4 | Overs 9
Nabi 3(7), Sadiq 7(13)
Mahmudullah gets some turn and beats the batsman and the keeper on the fourth ball. 2 byes. Earlier, Sadiq went for a suicidal run and survives as the fielder fails to hit the stumps at the non strikers end.
Afghanistan 43/4 | Overs 8
Nabi 2(6), Sadiq 5(8)
Abdur Razzaq bowls a tidy over. The third ball fetched three runs. Razzaq too gets some handy turn.
Afghanistan 38/4 | Overs 7
Nabi 1(4), Sadiq 1(4)
Afghanistan are on a self-destruction mode. First ball from Mahmudullah was played towards leg-side by Mangal and set off for a single. Sabbir at square-leg hits the bulls eye at the non-strikers end, Mangal was more than a feet outside the crease. Karim Sadiq is the new batsman and manages to survive.
OUT! Mangal 0(1)
Afghanistan 36/3 | Overs 6
Nabi 0(3), Mangal 0(0)
A reprieve wasted by Gulbadin Naib. The first ball was swung wildly towards long-on and sabbir Rahman dropped a sitter and conceded a boundary. But Naib went for a slog sweep and this time Sabbir took it comfortably. The next ball Najeeb Tarakai got a leading edge and was caught at covers. Shakib is on fire. There is turn and he has used it to great effect. There was a stumping appeal against Nabi but he survives. An eventful over. Two wickets and four runs.
OUT! Naib 21(22), Tarakai 7(11)
Afghanistan 32/1 | Overs 5
Tarakai 7(10), Naib 17(20)
Gulbadin Naib has been sent out to go berserk. The first ball by Al Amin Hossain is a no-ball, so Naib got a chance to swing his arms without pressure. And he does it to perfection, smashes it over long-on for four. The next one is slapped through covers for one more boundary. More frustration follows as Hossain concedes four leg-byes. The fielders were stuck at the edge of the circle and Naib picks a quick single on the fourth ball. Tarakai swings and misses the last two deliveries.

Shakib is surely the big man for Bangladesh in this tournament

Afghanistan 17/1 | Overs 4
Tarakai 7(7), Naib 8(16)
Shakib comes into the attack. A tidy over from him. Uses his variation to good effect. The fourth ball of the over almost got Naib out leg-before, the inside edge saved him. The Afghans are failing to connect the ball and get it into gaps.
Afghanistan 15/1 | Overs 3
Tarakai 6(6), Naib 7(11)
Some Pakistani influence in Afghanistan batting — trying to go for suicidal run-outs. The first ball from Mortaza is a wide. Tarakai hits the second ball straight to fielder and sets off for a single. Survives. There is no plan to this Afghan innings, just eager to play the shots aerially.

Afghanistan 8/1 | Overs 2
Tarakai 1(1), Naib 6(10)
Six! Gulbadin Naib swings one over midwicket, he had connected it well and the ball lands beyond the rope. Naib is trying to hit everything out of the stadium. A bit of swing for Al Amin Hossain, hits the pads of Naib but survives.
Afghanistan 1/1 | Overs 1
Tarakai 0(0), Naib 0(5)
There can’t be a better way for the hosts to start their campaign. First ball by Mashrafe Mortaza is full and wide, Mohammad Shahzad slogs at it. It was hit with enormous power but the bottom edge flies to just the edge of the circle. Mahmudullah takes the catch and the Bangladeshi fans are elated. Afghanistan look like a team in hurry. New batsman Gulbadin Naib too goes for a big shot and misses.
Out! Shahzad 0(1)

Hello and warm welcome to the live updates of CricketCountry’s live blog of the first match of the ICC World T20 between Bangladesh and Afghanistan. I am Abhijit Banare and I will be bringing you the live updates of the match. Anyone who wins this will virtually be assured of a second round place.

Bangladesh have a good side with the right balance for the conditions. Their batsmen are explosive and the spin-bowlers hold the key on the slow surfaces. Although they lost all their games at the recent Asia Cup 2014, the two wins in the warm-ups will give them confidence. This in many ways is a revenge game for the embarrassment they faced at losing to Afghanistan in the Asia Cup. On the other hand, Afghanistan would back their talent to come good and hope for an encore. 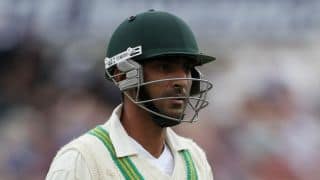 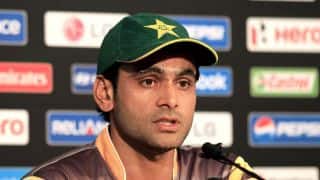 ICC World T20 2014: Mohammad Hafeez says Pakistan should not get 'swayed by emotion' against India