Australia trail Bangladesh by 80 runs at stumps on Day Two of the second Test with 8 wickets remaining.

Nathan Lyon was the star with the ball for Australia, bagging 7 for 94 in the first innings. At 256 for 6 at stumps of Day One, Bangladesh lost the rest of their wickets early on Tuesday, with no exceptional contribution coming from the tail-enders. Ashton Agar got two wickets. Mushfiqur Rahim took a spectacular catch to get rid of Renshaw before lunch before Warner, Peter Handscomb and Steven Smith took visitors to safe shores.

Australia are trailing 0-1 in the two-match series, and will be eager to post a good score in the first innings to make amends. They have a lot to lose, because they will drop to 6th spot in ICC Test Rankings if they lose at Chittagong as well. On the other hand, Bangladesh are eying their third whitewash: they had earlier defeated West Indies (in 2009) and Zimbabwe (in 2014). 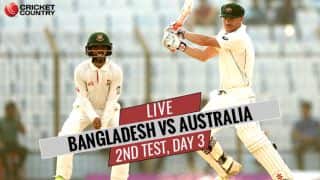