Bangladesh batsmen continued to dominate and pile on runs in the first session as England's situation was emphasized by their poor day in the field.

Bangladesh clearly pushed themselves into a winning position after having more positives in the first session as compared to England. Day Three was superbly set up after both teams played an enthralling Day two of the second Test of at Mirpur, Dhaka. England after winning the first Test at Chittagong was on the back-foot since the start of Day Three. Bangladesh despite losing a wicket did not look one-bit nervous as Shakib Al Hasan and Mushfiqur Rahim scored runs at a brisk pace. England were unlucky not to pick up easy wickets as poor fielding meant Banlgadesh lead stretched beyond the 200 run mark. England bowlers came into their own just on the ‘Strokes’ of lunch nabbing two quick wickets. Going into lunch Bangladesh are 268 for 7 with Shuvagata Hom not-out on 15* leading England by 244 runs. FULL Cricket Scorecard: Bangladesh vs England, 2nd Test at Mirpur

Bangladesh started with Imrul Kayes and Shakib this morning. Kayes was looking good for a hundred but gave his wicket away after England bowler’s toiled hard for the first session of play. Kayes was lucky to survive twice, two chances were dropped one a tough catch by Joe Root and other by Cook. Kayes was taken by Moeen Ali who had a great day with the ball in the first innings.

Kayes in an attempt to sweep, missed the ball completely and was leg-before for 78. Kayes added 48 runs with Shakib. Speaking of Shakib he batted fluently with boundaries. Shakib kept the scoreboard ticking with singles and doubles. Rashid came into the attack was struck in his first over. After getting hit for a boundary in Rashid outfoxed Shakib to get wicket for 41. Shakib was unluckily to chop the ball onto his stumps. Skipper Mushfiqur and Shakib had a 38 run stand. Mushfiqur did not look much comfortable out in the middle dead-batting everything.

Mushfiqur was dropped by Ben Duckett off Steven Finn. Mushfiqur did not add much and got out adding just 2 runs. Ben Stokes got key wicket of Mushfiqur who played a poor shot giving an easy catch to Cook at slip. Sabbir Rahman and Shuvagata Hom did not bog down against the run of play and went on the attack. Sabbir looked to take apart Stokes hitting him for 2 back-to-back boundaries.

Sabbir got out just before the clock hit the lunch mark after Rashid picked him up. Rashid trapped Sabbir on the back foot off a quicker one. Hom on the other end looked to make good use of this opportunity. Hom also went all-out Rashid, hitting the young leggie for couple of crackling boundaries. Hom remained unbeaten on 15 off 11 balls at lunch.

Day Two of the second Test between Bangladesh and England turned out to a topsy-turvy affair. A total of 10 wickets tumbled in the entire day as both England and Bangladesh showed resistance with the bat in their respective innings. The Bangladeshi spinners wrecked havoc over the visitors as there famed batting line-up were downed to 144 for 8 before Rashid and Woakes provided some rear-guard action. 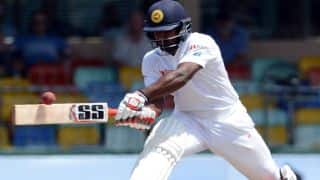