Alastair Cook is England's most capped player and their leading run-scorer in Tests.

England skipper Alastair Cook becomes the first opening batsman to aggregate 10,000 runs in Tests. He achieved this feat during his brief innings in the first innings of the second Test against Bangladesh at Dhaka. Sunil Gavaskar with 9,607 runs and Graeme Smith with 9,030 runs lie at No. 2 and No. 3 spots respectively in the list. Cook at the beginning of the series, surpassed Alec Stewart s record to become the most capped England cricketer. Cook is also England s leading run-getter in Tests. Cook has not had the best of tours of Bangladesh. He has scores of 4, 12 and 14 in his three innings so far. He will want to put up a good show in the next innings. FULL Cricket Scorecard: Bangladesh vs England, 2nd Test at Mirpur

He has scored a total of 10,629 in 135 Tests so far at an average of over 46. Cook has 29 ton and 51 fifties to his name so far. Cook has led England in 54 Tests and has scored over 4,000 runs, with 11 centuries and 22 half-centuries as captain. Cook just had his second child just before the beginning of the Test series against Bangladesh and has admitted that he does not know how long he can keep playing for England.

We play Tests so quickly nowadays so I could do [break Tendulkar’s appearances record] The danger is looking at it, he told journalists late Tuesday in Chittagong. 70-odd Test matches now seems a long way away and if I am brutally honest the more times you pack your bags to leave your family at home you do question how long you can keep doing it for, Cook said. 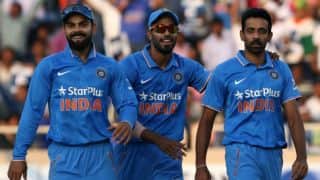