The second day of first of the two-Test series between Bangladesh and England will began with visitors score of 258 with the loss of seven wickets on Friday at the Zahur Ahmed Chowdhury Stadium in Chittagong on Thursday, as the live cricket streaming of the match is available in India on Hotstar, while the live telecast of the match is available on Star Sports 2, and Star Sports HD2. As for Bangladesh, the live streaming is available on gazitv.com, while the live telecast is available on Gazi TV. After getting an excellent start to the match on day one, Bangladesh lost the plot after the 88-run partnership between Moeen Ali and Jonny Bairstow. Had there been no such partnership between Moeen and Bairstow, England would have been surely all out under 200. FULL CRICKET SCORECARD: Bangladesh vs England, 1st Test, Day 2 at Chittagong

Bangladesh are coming off a hard-fought, but losing performance against England in the ODIs, as they lost the series 2-1, while they aim to make a turn around in the longer format of the game, as it is a whole new different ball game. Teenage debutant Mehedi Hasan claimed five wickets for 64 runs to stun England’s top order and give Bangladesh the upper hand the first day of the Test, while Moeen survived five reviews on his way to smashing 68 runs and Bairstow made 52 as England steadied against some superb bowling from Bangladesh’s spinners to post a respectable score. Bangladesh vs England 2016, 1st Test at Chittagong, Preview and Predictions

Chris Woakes was 36 not out and Adil Rashid unbeaten on five. Experienced left-arm spinner Shakib Al Hasan finished the day with 2-46 to complement the 18-year-old Mehedi, who became the seventh Bangladeshi bowler to take five wickets in his Test debut. It will interesting watch the contest on day two as the hosts will look to wrap up England’s batting as soon as possible. 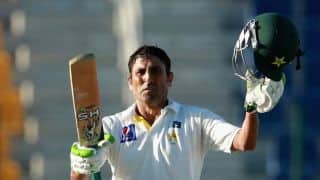 Bangladesh vs England,1st Test: Mehedi Hasan's 6-for restricts visitors to below 300