New Zealand are ahead 1-0 in this T20I series following their impressive win in the first match at Napier. It was the first-ever T20I at the venue and the hosts ensured that they begin with a win.

Having registered a comprehensive 6-wicket win in the first T20I at the McLean Park in Napier, hosts New Zealand will aim to seal the three-match affair in the second game itself, on Friday. The second as well as the final T20I will be played at the Bay Oval in Mount Maunganui, post which the two teams will be involved in a Test series. So far, it has been one-way traffic with New Zealand hammering Bangladesh with conviction in almost all contests. The visiting side has witnessed far too many individual performances, but they have not conjured up enough to challenge the Kiwis in their backyard.

New Zealand are ahead 1-0 in this T20I series following their impressive win in the first match at Napier. It was the first-ever T20I at the venue and the hosts ensured that they begin with a win, which was comprehensive to say the least. New Zealand restricted a lowly Bangladesh to 141 for 8, and without much qualms, they were able to go past the finish line. Kane Williamson got everything right as far as decision making is concern, as New Zealand handed out T20I debuts to three players, out of which two played crucial roles in their victory.

Williamson was the star of New Zealand s win for more than one reason. In their chase, Williamson provided the support which none of the other batsmen could, and stroked his way to 73 not out. His score at Napier is now Williamson s highest in T20Is.

Debuts to the new players provided them with an excellent opportunity to make positive starts to their respective careers. Ben Wheeler claimed 2 for 22 off his 4 overs, whereas Lockie Ferguson joined a very exclusive club of bowlers. Ferguson claimed two wickets off his first two balls in T20Is, and thus joined a special, but a tiny league, of bowlers who claimed wickets off their first deliveries.

On the other hand, aggressive batsman Tom Bruce failed to make a mark on debut as he fell for 6. His wicket along with that of a few others put New Zealand in a spot of bother, but there was Colin de Grandhomme s brilliance in store that saw them off. De Grandhomme scored a brisk 41 and added 81 runs for the fifth wicket with Williamson to guide New Zealand to win with 2 overs to spare.

New Zealand have had a flurry of young players who are enjoying a few wins early on in their careers. But there will be a forced change to their side, as Neil Broom who was originally playing in place of the injured Martin Guptill has been ruled out due to a fractured finger. Broom has been replaced by George Worker, who averages 45 after two T20Is for the Kiwis. Apart from this, no other change is anticipated in the New Zealand side.

The visitors, according to reports, should like the wicket at the Bay Oval. It has been reported that the wicket will be slow at Mount Maunganui. But unless Bangladesh do not get their act together and play as a unit, their chances of winning will remain slim.

So far on this tour, there have been individual sparks of brilliance, but never a team performance from Bangladesh. The visitors will remain without the services of Mushfiqur Rahim, who remains in New Zealand trying to recover from a hamstring injury. For Bangladesh to win, they will have to bat as a unit as the bowlers have so far failed to exploit the conditions in New Zealand.

Tamim Iqbal and Imrul Kayes were top scorers for Bangladesh in the ODIs, but they flopped in the first T20I. Shakib Al Hasan remains the biggest hope, but Bangladesh cannot afford to depend on a particular set of players. In the first game, a brilliant fifty from Mahmudullah and Mosaddek Hossain s 20 pushed Bangladesh to a total of respectability, but if New Zealand keep batting the way they have been, the visitors will find themselves having too much to do. Unless Bangladesh get their act together and play as a unit, it will be tough for them to stop the New Zealand juggernaut. 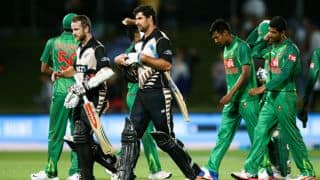 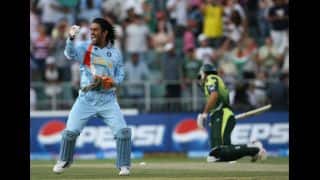 MS Dhoni: 9 memorable moments from his ODI and T20I captaincy