Rahim was caught by Ronchi off the bowling of Anderson, with BAN losing their 5th wicket with 182 on board.

Bangladesh lost their fifth wicket with 182 on board when wicket-keeper batsman Mushfiqur Rahim was caught by his opposition counterpart Luke Ronchi off the bowling of Corey Anderson to depart for a score of 15 off 25 balls during the ICC Cricket World Cup 2015 Pool A match between Bangladesh and New Zealand at the Seddon Park in Hamilton on Friday.  Live Scorecard: Bangladesh vs New Zealand

With both teams having already qualified for the quarter-finals, it will be an inconsequential match for New Zealand and Bangladesh. While New Zealand have won all of their games played in the tournament so far, including a narrow one-wicket win against co-hosts Australia in Auckland, Bangladesh have shown a tremendous improvement in their quality of cricket by qualifying for the quarter-finals for the first time. They posted a 15-run win against England, knocking the latter out of the competition in the first round itself. ICC Cricket World Cup 2015: Complete Coverage 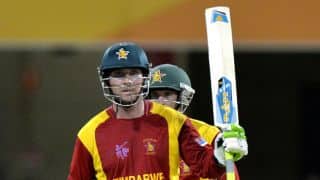 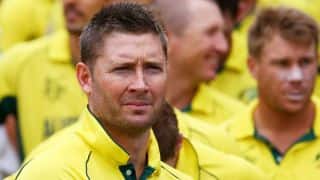