The live telecast of Day Two of the second Test between New Zealand and Bangladesh at Christchurch will be available on Sky Go.

The live telecast of Day Two of the second Test between New Zealand and Bangladesh at Christchurch will be available on Sky Go. Bangladesh were bowled out for 289 on the first day of the match. After winning the toss, New Zealand skipper Kane Williamson invited Bangladesh to bat. The visitors were already bogged down before the start of the match, as they missed out on services of their captain Mushfiqur Rahim and opener Imrul Kayes. While Rahim suffered from thumb injury and is likely to stay out of action for at least three weeks, Kayes has a grade-two thigh strain.

Soumya Sarkar, who was promoted to the opening slot in Kayes absence, made the most of his opportunity. The southpaw scored a stroke-filled 86 off 104 balls, hitting 11 balls to the fence in the process. He was involved in an important 127-run stand for the third wicket with Shakib Al Hasan. The latter, who had got his maiden Test double ton in the last Test, scored 59 important runs. Barring these two, only Nurul Hasan, who came in for Rahim, scored 47 lower-down the order. Due to the contributions from these three batsmen, Bangladesh posted 289 on the board. The day s play ended with the final wicket of Bangladesh s innings.

Tim Southee and Trent Boult, New Zealand s trusted new-ball pair, shared 9 wickets among them. Southee finished up with figures of 5 for 94 and Boult registered figures 4 for 87. Neil Wagner picked up the remaining wicket. Day Two will witness New Zealand start their pursuit of gunning down Bangladesh s total and build-up a strong lead. 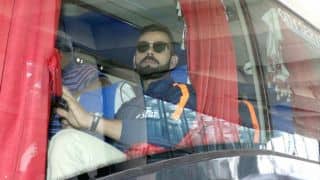