Tamim Iqbal and Imrul Kayes put up the highest Bangladesh partnership for any wicket.

Bangladesh and Pakistan face off on the final day of the first Test at the Sheikh Abu Naser Stadium in Khulna on Saturday. Tamim Iqbal and Imrul Kayes are set to resume from their overnight scores of 138 and 132 respectively, with Bangladesh perched comfortably at a score of 273 for no loss. Live Scorecard: Bangladesh vs Pakistan, 1st Test, Day 5 at Khulna

The left-handed pair put on their nation’s highest partnership for any wicket as Bangladesh, trailing by 296 runs on the first innings, closed the day strongly at 273 for no loss in their second knock. Tamim was unbeaten on 138 to become the first Bangladesh batsman to score seven Test centuries. He beat former captain Mohammad Ashraful’s tally of six hundreds. LIVE Updates: Bangladesh vs Pakistan, 1st Test, Day 5 at Khulna

It was Tamim’s third century in as many Tests, having made identical scores of 109 in the last two matches against Zimbabwe in November. Imrul scored 132 not out, his third hundred, as the bowlers toiled on the placid wicket at the Sheikh Abu Naser stadium that has already produced 1,233 runs and just 20 wickets over the four days.

Catch the live telecast of the Bangladesh vs Pakistan 2015, First Test Day Three at Khulna on Gazi TV in Bangladesh.

Live streaming is becoming famous among people who do not have access to televisions. People can now access live streaming from their office or mobiles, which has made viewing any sort of sports much easier for everybody. There are many websites offering live streaming but they are not entirely reliable. The user, thus has to be very careful in picking the right website. Live Streaming: Bangladesh vs Pakistan, 1st Test Day 5 at Khulna (For Pakistan users) 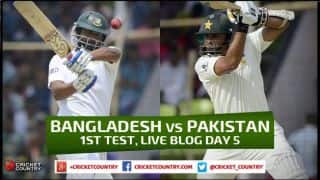