This is Pakistan’s chance to strengthen their chances in ICC World T20 2014.

The home side has had a tough time in the recent past. Having lost two games in the Super-10s, Bangladesh are all but out of the competition as they have lost incomprehensive fashion. Up against them are Pakistan, who have been buoyed by the victory against Australia. With India already in the semi-final, there is only one more berth up for grabs, Pakistan face a tough fight with the West Indies also vying that spot. So, Pakistan would target a big victory against Bangladesh to boost their net run-rate.

This game is in the afternoon and the dew may only set in during the second innings as the sun sets. Thus, a team can take either call. Some may want to put the runs on the board, others may want to bowl first. Again, the emphasis would be on spin. Pakistan played Zulfiqar Babar along with Saeed Ajmal and it did work wonders for them. Bangladesh have Shakib Al Hasan and Sohag Gazi. It would be interesting to know if they bring in Abdur Razzak, who sat out of the last two games.

Pakistan have Umar Akmal in fantastic form and all eyes would be on him to help them set a good score. At the top, Kamran Akmal too has looked in good touch, but is yet to convert a start. Ahmed Shehzad is also a dangerous batsman and Pakistan would hope he performs. Mohammed Hafeez, the skipper, will hold the batting at No 3 with the others batting around him. And, not to forget Shahid Afridi, later in the innings. Depending on the situation, they can decide if he is to be promoted.

Umar Gul seems to have found his mark after a good performance in the last game. He did struggle after returning from injury, but there are some positive signs for Pakistan. Bilawal Bhatti struggled in the last game. Perhaps, they may consider bringing back Junaid Khan or even Sohail Tanvir, who has a good record in T20 cricket.

Bangladesh face a plethora of questions as they head into the game. There was a word around that all was not well in the camp, but they have to put that behind them and perform. Anamul Haque is one player who continues to impress and has become a dependable batsman at the top. Tamim Iqbal will also be dangerous if he gets going. But, again, there seems to be a lot for Mushfiqur Rahim and Shakib Al Hasan to do. They are their trump cards. Although Mahmudullah Riad and Nasir Hossain come in later, Mushfiqur and Shakib are the most dependable.

In the bowling, Al-Amin Hossain has been very impressive. He has brought in a fresh change to the bowling attack and does get the ball to come into the right-handers. Mashrafe Mortaza has been economical and Bangladesh would want him to maintain that. Ziaur Rahman gives them another option with the ball.

So, this is Pakistan’s chance to strengthen their chances. However, you can never write off Bangladesh. In their last meeting against Pakistan during the Asia Cup early this month, Bangladesh gave them a huge scare. 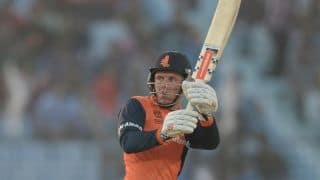