South Africa have announced a 14-man squad for the upcoming three ODIs versus Bangladesh at home. Both the sides are currently involved in the two-Test series with Proteas leading 1-0. This will be Faf du Plessis‘ first series as full-time ODI captain ever since he took over from AB de Villiers. Temba Bavuma and Dane Paterson have been roped in the side whereas JP Duminy holds onto his spot despite going nearly a year without scoring a fifty in the format.

Linda Zondi, CSA’s convenor said, “Dane did very well in the T20Is against England earlier this year, particularly when it came to death bowling,. We now want to see if he can do a similar job in the 50 overs format. Faf will lead the Proteas now that he has taken over the captaincy from (AB) de Villiers in the ODI format. This is the start of our campaign to begin preparing our squad for the 2019 ICC World Cup.”

Chris Morris and Morne Morkel have missed the bus due to injury. Keshav Maharaj, despite his 7-wicket haul in South Africa’s 333-run victory in the first Test, has been dropped.

South Africa are ranked second in ICC ODI rankings, Bangladesh, on the other hand, occupy the 7th spot. 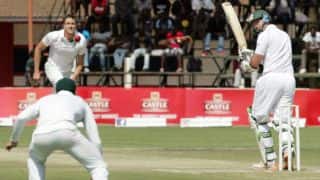