The live telecast of the match will be available in India and Sri Lanka on Ten 1 HD, and Ten 3.

Bangladesh’s Soumya Sarkar and Tamim Iqbal shared a century stand for the first wicket before Sri Lanka took two late wickets to tighten their grip on the first Test at Galle on Wednesday. The visitors were 133 for 2 at stumps on the second day, trailing by 361 after Kusal Mendis, Niroshan Dickwella and Dilruwan Perera had scaled up the hosts’ total to 494. Mendis played a brilliant knock of 194, while Dickwella made 75 and Perera contributed with 51.The live telecast of the match will be available in India and Sri Lanka on Ten 1 HD, and Ten 3. As for the live telecast in other countries, it will be as follows: BTV in Bangladesh, PTV Sports in Pakistan, OSN Sports in Middle-East and Willow TV in USA. The streaming will also be available on the respective sites of the channels. Full Cricket Scorecard: Bangladesh vs Sri Lanka, 1st Test at Galle

From Bangladesh, Soumya was leading the response with an unbeaten 66 after his 118-run opening stand ended with a bizarre run-out for his partner, Tamim, who made 57 off 112 balls with six fours. Sri Lankan wicketkeeper Dickwella had appealed for a caught behind off Lakshan Sandakan and dislodged the bail quickly once his appeal was turned down as Tamim walked out of the crease. Perera then had No. 3 Mominul Haque plumb lbw for 7 to give Sri Lanka the edge in the contest at the Galle International Stadium.

Both Soumya and Tamim benefited from sloppy Sri Lankan fielding. Perera was dropped Soumya on 4 at gully and Dickwella missed a catch off Tamim on 28. Earlier, Mendis was agonisingly denied a maiden double-century as he tried to reach his milestone in style.

Tamim caught him on the long-on boundary off teenage off-spinner Mehedi Hasan as the right-hander attempted an audacious six. 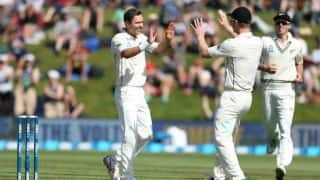 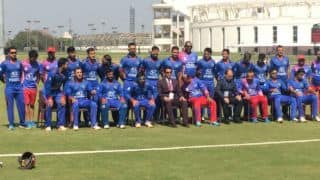