Shehan Madushanka surprised many with his inclusion in the squad for the Bangladesh Tri-Nation series finals.

Shehan Madushanka surprised many with his inclusion in the squad for the Bangladesh Tri-Nation series finals. After all, he had played only 6 domestic matches across formats. Madushanka justified his selection by becoming the fourth Sri Lankan to take a hat-trick in ODIs and the first Sri Lankan to take hat-trick on debut. He finished with 3 for 26 in his 6.1 overs. Madushanka took the important wickets of Mashrafe Mortaza, Mahmudullah and Rubel Hossain.

Sri Lanka managed to post a total of 221 after opting to bat. However, they managed to wind up Bangladesh’s innings by 142 winning their first trophy in 2018 after a rough last year. Here is a list of hat-tricks in ODI’s.

Madushanka had only 6 domestic matches before making debut for Sri Lanka. In his short career of 3 First-Class matches he managed to pick up 8 wickets with best figures of 3 for 25. However, this has been a very positive start for Sri Lanka as they have bounced back strongly after losing the first two games of the tournament. 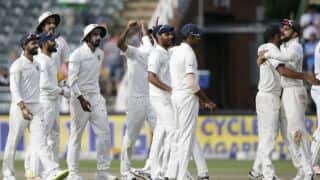